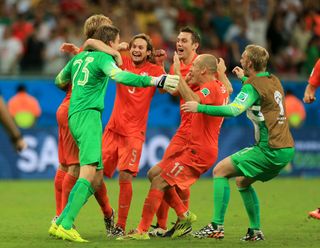 This one was all about the goalkeepers. Holland are through to the semi-finals of the World Cup after beating Costa Rica 4-3 on penalties, after 120 minutes of football in Salvador ended goalless.

Los Ticos were but a few spot-kicks away from becoming the first post-war CONCACAF team to make it to the last four of a World Cup, and if they had done so they’d have had to thank their outstanding keeper Keylor Navas, who shone once again, making a plethora of saves to keep the Dutch at bay.

Nevertheless, despite Navas’ heroics, by the time the Arena Fonte Nova had cleared out, the keeper's name on everyone’s lips was Tim Krul. With a minute of extra-time to play, Louis van Gaal threw on the Newcastle keeper specifically for the penalty shootout. The gamble paid off. Krul made two saves and Holland advance to another semi-final – their third of the last five World Cups. Here’s how Stats Zone saw it.

Both managers made changes to their line-ups for this last eight clash. For Holland, Paul Verhaegh and Nigel de Jong (injured) sat out, Memphis Depay and Bruno Martins Indi drafted in as replacements. Costa Rica were without Oscar Duarte, suspended having been sent off against Greece. Johnny Acosta replaced him in defence.

Holland started in a 3-4-3 formation. Alongside Algeria coach Vahid Halihodzic, Van Gaal has probably been the most tactically diverse manager at this World Cup, regularly changing both personnel and his system to better negate his opponent. The Manchester United manager-to-be switched his strategy again in Salvador, modifying his team’s shape to feature a three-man front-line of Depay, Robin van Persie and Arjen Robben.

There was plenty of early prodding in the opening stages, but very little penetration. Costa Rica, playing in the rigid, organised 5-4-1 shape we've become accustomed to, saw less of the ball but ceded no ground to their more illustrious opponents early on. There wasn't a single shot in the opening 10 minutes from either side.

This pattern continued until the 21st minute when a good opening came for Holland. With Costa Rica unbalanced, Depay sprinted forward on the break and provided for Van Persie to shoot. But Navas, one of the players of the tournament so far, saved well - and was alert to claim the rebound from Wesley Sneijder.

Holland were on the front foot, enjoying the ball like it was an old friend. Costa Rica’s attacking third passes in the first 25 minutes said it all.

In the pre-match press conference, Jorge Luis Pinto, unhappy at what he had seen in Holland's 2-1 win over Mexico, singled out Robben, imploring referee Ravshan Irmatov not to fall for what he perceived as diving.

Pinto was right to single out Robben because as the first half wore on the Bayern Munich star grew in influence. Seven minutes before the break, Navas made another excellent save from a peach of a free-kick by Sneijder, after a foul on Robben. Easy tumbler or not, Robben was creating problems for Costa Rica, beating his man and drawing fouls.

Robben was a tricky customer, but him aside Costa Rica had their house in order and were defending well. The organisation Pinto instilled in his back-line has been one of the most impressive characteristics of Los Ticos in their run to the quarter-finals. And when they do flinch, Navas has been a heroic last line of defence.

Costa Rica's issue, though, was going forward. Joel Campbell was seeing little of the ball in forward areas, chasing without ever really threatening in the first half.

It was goalless at half-time. Yeltsin Tejeda was the game's top tackler, battling away in midfield in a much improved display, while Martins Indi was finding space down the left, the game's top passer.

Holland were efficient with their shooting in the first half – thumping all 4 shots on goal, but Navas was equally effective, saving all 4.

The start to the second half was of a similar ilk to the first: plenty of Holland possession (69%) but only 1 shot attempted in the first 18 minutes. Van Gaal’s side were racking up the passes, but not much else.

They were slow and lacking ideas. The game was quite lackadaisical, Holland apparently lulled into a false sense of security by just how much of the ball they were seeing. Much like France and Belgium in these quarter-finals, Holland were going through the motions.

After the hour mark, Campbell came off to be replaced by Marcos Urena. For about 70 minutes of Costa Rica’s win over Greece, Campbell had looked absolutely knackered and his performance in Salvador had an air of fatigue about it. Though he cut a frustrated figure at being substituted, he could have few complaints.

The game was surprisingly low on incident. Van Gaal hauled off Depay. No surprise really, neither the PSV youngster nor Van Persie had done much in attack to unsettle Costa Rica’s impressively sturdy defence.

The game began to chug towards extra-time, but not before Sneijder hit the post. Giancarlo Gonzalez was having a fine game in defence, but there was mayhem in the final few minutes of the match. Van Persie had a golden chance to win it - a cross fell perfectly at his feet six yards out. It was the kind of chance he's been burying his whole career from Rotterdam to Manchester.

But, incredibly, he failed to connect and his hilarious air shot virtually confirmed we'd be going to extra-time. There was time for one last chance. Van Persie seemed to take the miss personally, demanding to take a late free-kick. After Navas punched it away a goalmouth scrambled ensued in which Yeltsin Tejeda, who was excellent in midfield, cleared off the line.

Holland had seen a lot of the ball down the right side, and Robben had once again been a key man.

Extra-time burst into life in fits and starts. Always a threat, Sneijder hit the bar, while at other end Urena forced a great save from Jasper Cillessen as it looked for just a moment that Costa Rica might win it. Cillessen was then subbed off in the final minute of extra-time as penalties loomed.

The Dutch had never won a penalty shootout in a World Cup. But Van Persie, Robben, Sneijder and Dirk Kuyt all scored. In goal, Krul saved twice from the spot to vindicate his manager's brave roll of the dice. Holland play Argentina in Sao Paulo for a place in the World Cup final.

"We're hurt but we're happy," said Costa Rica manager Pinto post-match. "When we came here many people didn't believe in us, but during this World Cup we've done many beautiful things. We've left a positive and dignified impression of Costa Rican football. I'm proud of my players and so is the country."

After a heroic effort, seeing off Uruguay, Italy, England and Greece in the process, Pinto and his team will go home to a rousing reception after gracing the competition.