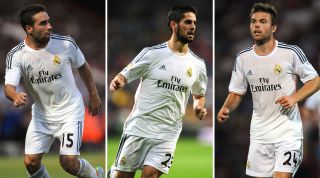 Gareth Bale might be the world’s most expensive footballer, but Real Madrid have yet to see the best of the Welshman following his transfer from Tottenham. In fact, three other new signings have made a far bigger impact.

Whereas Bale understandably dominated the headlines after his drawn-out transfer saga, Real also made three other very intelligent purchases, recruiting a trio of youngsters who starred in Spain’s U21 success in Israel this summer.

Isco, Asier Illarramendi and Daniel Carvajal are all very different players, but have improved the quality of Real’s squad considerably.

From that trio, the star name was unquestionably €30m signing  Isco. After performing excellently throughout Malaga’s run to last year’s Champions League quarter-finals, he was also the Spanish U21s’ most important player in their summer victory. A textbook modern Spanish playmaker, capable of playing on either flank or through the middle, Isco made an instant impact at the Bernabeu, scoring twice on his home debut against Athletic Bilbao.

Carlo Ancelotti initially used him on the left flank, playing Ronaldo upfront in a rough 4-4-2 system. That’s a different format to the way Real played last season, when Mesut Ozil started centrally and made runs out to the left to support Cristiano Ronaldo’s darts inside from that flank.

Ancelotti knows he wants to play with a striker, a right-winger and two central midfielders, but he still seems undecided about the positioning of Isco and Ronaldo. One must go centrally, the other on the left.

After an excellent start, Isco’s form has dropped slightly – and in the 2-0 weekend win over his former club Malaga, he was particularly quiet. Considering Angel di Maria’s good form on the opposite flank, the gradual introduction of Bale might mean Isco is rotated out of the side more than he would have expected six weeks ago.

In the centre of midfield, Illarramendi has had the opposite experience to Isco – he started quietly, but has pushed on and performed well in his last two matches. At the start of the season, the €32m signing from Real Sociedad seemed unsure of his precise role in the side. Ancelotti was using either Sami Khedira or Luka Modric, two very different types of player, alongside Illarramendi, meaning his role was often confused.

But his display in the comfortable 4-0 win over Copenhagen on the previous Champions League matchday was encouraging – he constantly won possession in front of his defence, and was also the game’s most prolific passer, spreading play calmly and reliably to the flanks.

His performance at the weekend against Malaga was even better – his distribution was still consistent, but he became more proactive with his tackling. Not only were all seven of his challenges successful, he also regained possession in advanced zones, allowing Real to attack Malaga’s backline quickly.

At right-back, meanwhile, Carvajal has been quietly impressive. A more attacking option than last season’s regular Alvaro Arbeloa, he impressed during his season at Leverkusen, encouraging Real to exploit their €6.5m buyback clause.

In Real’s 2-2 draw at Villarreal, with most of the attention upon Bale making his debut higher up on the right flank, Carvajal was arguably Real’s most impressive performer. He regularly won the ball in the right-back position, and also created four chances, including the assist for Bale’s debut goal.

That was a fine demonstration of his all-round capabilities. Everyone knew he was a fast, dangerous attacking player who had excelled in a counter-attacking side in the Bundesliga, but his defensive abilities have surprised many.

He’s a feisty, committed tackler who takes up advanced positions and wins possession as quickly as possible – and while this can mean he leaves space in behind, he’s been consistently successful with his challenges, as proved by his performance against Malaga.

Ancelotti is set to embark upon the toughest four days of his tenure in Madrid so far, with a home game against Italian champions Juventus on Wednesday evening, followed by his first trip to the Nou Camp as Real manager on Saturday.

They’re the type of matches for experienced players, but this young, exciting, energetic trio should also have an impact.