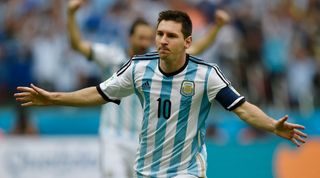 It's good to see that Lionel Messi has finally turned up to a World Cup, eh? Before that we were wondering whether the Barcelona dribble king was worth the fuss; before the tournament he'd netted as many goals in this competition as Gary Breen. Disgusting.

Well it's a good job those people are considered idiots. Because little Lionel lit up Porto Alegre's Estádio Beira-Rio on Wednesday, lashing home a third-minute drive from a rebound before sticking in a sensational free-kick on the stroke of half-time.

In between both goals, Nigeria had a golden boy of their own to thank for speedy levellers; 21-year-old Ahmed Musa curled home a brilliant first just a minute and 20 seconds after Messi's opener, before adding a second two minutes after the break. But Argentina left-back Marcos Rojo made sure of maximum points in Group F for Alejandro Sabella's men after converting from a 50th-minute corner.

Argentina racked up passes in the opening exchanges: after eight minutes they'd completed 69 to Nigeria's 14. After the 15-minute mark, the latter had made just 5 in the attacking third – 1 of which was the assist for Musa's equaliser.

Di Maria was a constant thorn in Nigeria's side. The Real Madrid man was heavily involved from the first whistle, as he started on the left of Sabella's midfield trio. After half an hour he'd tested Enyeama 3 times without success, and was persistently seeking killer balls to supply Messi, Gonzalo Higuain and Sergio Aguero (although he failed in this respect).

As the half drew to a close, Argentina's dominance was clear. Javier Mascherano had kept possession excellently under relatively little pressure, with the South American's patient probing helping his team control the game. Sabella's men hit through-balls early as they looked to get their pacy trio in behind Nigeria's slower back-line.

And then came Messi's moment of brilliance. He'd only just forced Enyeama into a strong save from another free-kick moments before, but nailed the second to perfection to leave Nigeria's No.1 impossibly stranded. By half-time the diminutive genius had only received 1 pass in the opposition box, and crafted another 2 chances for his team-mates. With little surprise he was subbed off after 62 minutes with the game won.

Argentina dominated the shot count 10-3 at the break, having sent only 2 efforts off target. Of Nigeria's 3 shots, 2 (their non-scoring efforts) came from outside the box, demonstrating their difficulties forcing through.

Not that it stopped them from doing just that within two minutes of the referee's whistle. Musa capitalised on some find hold-up play from Emmanuel Emenike, bursting into the box before sidefooting past Sergio Romero. But, like in the first half, there was another goal; three minutes later this time, via left-back Rojo from a corner. It was the Sporting Lisbon star's first goal for the Albiceleste.

Despite Messi's magic, praise should be reserved for Di Maria. He continued his impressive first-half display into the second, and proved the hub of Argentina's attacking activity. By the end he'd received a whopping 76 passes, and registered 5 on-target efforts. That 3 came from outside the box proved a player with confidence.

Nigeria, having struggled to contain the wave of attacks against them, decided they's simply foul the South Americans.

It was a cracking game considering the relatively little at stake, but one perhaps more one-sided than the score suggested. Argentina were allowed to complete 86% of their 516 attempted passes, while 13 of their 18 shots called Enyeama into action. Nigeria will come away relatively pleased, but with France likely in the last 16 they've got their work cut out to progress.