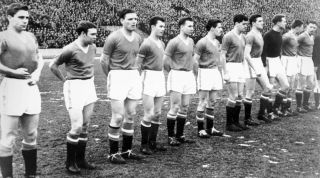 Today is February 6, the 62nd anniversary of the Munich Air Disaster.

How supporters choose to remember or memorialise it is their own business. For many, though, the photograph above is the one to get lost in. It’s the most famous. It shows Manchester United’s 1958 side deep in Tito’s Yugoslavia, pictured together for the very last time.

There they are, young, alive and brilliant, with those specks of snow and ice around them on the pitch, harbingers of tomorrow's doom.

The day before, the United squad had had dinner at The Majestic Hotel and walked the streets of Belgrade to watch an English film at a local cinema. These weren’t today’s millionaires, but still young, bright-eyed players high on life and excited for their futures.

Eddie Colman crooned Sinatra’s Come Fly With Me, which had been released the month before. Albert Scanlon had talked about the newest Marilyn Monroe film and, among the propaganda posters and the occasional tank, that would have been a strange kind of culture clash. Boys with the whole world at their feet, skipping between the symbols of oppression.

The next day, they would leave the bowels of the JNA Stadium and run out onto a frozen pitch in the winter sunshine. When the photograph was taken, they would still have been carrying Busby’s final, calming words.

“There are no terrors out there for you boys now.”

United were protecting a 2-1 lead from the first leg and, with goals from Denis Viollet and two from Bobby Charlton, they appeared to put the tie beyond Red Star inside 31 first-half minutes. Back came the Yugoslavians though, erasing that deficit in the quarter of an hour after half-time. Bora Kostic scored twice, Lazar Tasic beat Harry Gregg from the penalty spot. United held on, though. There had been terrors, but they'd been survived.

Munich Remembered: Manchester a City United, then and now

That night, both sets of players dined together. Afterwards, Busby relaxed a curfew and allowed his players out for an hour. Denis Viollet would drink with journalist and former Manchester City goalkeeper Frank Swift in the hotel bar. Roger Byrne, Bill Foulkes and Albert Scanlon would head to the British embassy’s staff club. Duncan Edwards and Tommy Taylor would drift out into the Belgrade night, eventually finding a bar stool alongside Red Star midfielder Dragoslav Sekularac.

And then, the end. The slush, the snow on the wings, the Football League's deadline and the third attempt at takeoff. Then, the headlines.

In The Footballer Who Could Fly, Duncan Hamilton wrote of his father remembering the news filtering down into the pits and then men emerging up into the light to drink silently, feeling that to enjoy themselves in any way on that day would have been wrong. It's doesn't reflect well on the modern world to know that, today, that kind of respect is very rarely seen.

There’s a rich library of images documenting those days and weeks after the crash. The sight of Bill Foulkes leading United out again at Old Trafford just 12 days later is deeply affecting and there are many others which convey the literal destruction. The wreckage of the mangled Elizabethan aircraft is hard to bear, so too the pictures of a gravely ill Busby, tented inside his hospital bed. In another, Foulkes and Gregg appear concerned but hopeful, shown looking down on a hospital bed which Edwards would sadly never leave. It’s all dreadful, no matter where you look.

Maybe the most upsetting written account appears in Patrick Barclay’s biography of Sir Matt Busby, The Man Who Made A Football Club:

‘Tommy Taylor would not marry Norma Curtis. Nor continue his rise to international stardom alongside Edwards and Roger Byrne at the World Cup.

Over were the career and carefree life of David Pegg.

The third of the Yorkshire pals, Mark Jones, would never again see his beloved June or toddler Gary. Never see or hold the daughter June would name Lynn. Never again set off across the fields with his faithful dog, who would be adopted by his brother Rick but die within a year.

Nor tend his birds; June advertised for new homes for them, causing a queue of children outside her house in Kings Road.’

Barclay’s account of the crash is so well-researched and vivid. It's brilliant but terribly harrowing for its detail. But those human stories are arguably worse, though. They’re upsettingly ordinary in a way which washes the tragedy of its historical gloss.

So perhaps the final line-up in Belgrade is Munich at its gentlest. To look at them there is to know terrible things. Their fate, of course, but also the aftermath: Gladstone Edwards taking a job in Dudley Cemetery to remain close to his son. Roger Byrne never getting to learn that his wife, Joy, was pregnant with the couple’s first child.

But the image’s dull sepia still possesses a quiet spirit. To look at it is to remember how Gregg went back and how he saved Vera and Vesna Lukic. It's to know that Charlton, Busby and Foulkes would all recover to lift the European Cup 10 years later, and that, really, there is a place where they and their fallen team-mates can live forever, side-by-side.

QUIZ Can you name the players with 5+ Premier League assists this season?