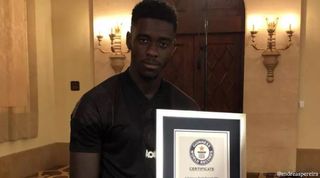 The 20-year-old defender, who spent last season on loan at Aston Villa, may not be getting the minutes he's looking for at Manchester United just yet, but at least he's achieving high.

News of his remarkable achievement was revealed by youth player RoShaun Williams on United's pre-season tour of California.

Alongside a photo of Tuanzebe and his certificate, Williams wrote on Instagram: "Congrats to the boy @axeltuanzebe_38 beating me at hungry hippos and getting the world record, you are the best."

Jose Mourinho's squad spent Wednesday morning trying to complete a number of challenges put forward to them by Guinness World Records, but Tuanzebe was the only one to taste victory.

Adjudicator Adam Brown said: "We have had a great day adjudicating a range of record attempts with the Manchester United football team as part of their collaboration with Guinness World Records.

"Axel Tuanzebe, was the bigger winner of the day and bagged himself the record for fastest time to clear a game of Hungry Hippos in a time of 17.36 seconds, beating competition from his fellow team-mates."

And that's what matters, Jose.

Want to see one of the worst tackles in history? Champions League qualification has you covered...