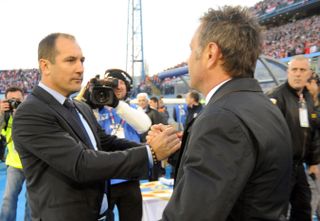 When Croatia played Serbia in March, it was all about context. Journalists from all over the world flocked to Zagreb for what had been labelled a huge grudge match ever since the teams had been drawn together in the same World Cup qualifying group.

Few of their reports centred on football, but that was to be expected given the circumstances. Not only was the 'grudge' based on a tragic, bloody conflict between the two nations that resulted in the break-up of the former Yugoslavia, there was also an almost-Shakespearean sub-plot of a 20-year feud between the two managers.

Igor Stimac and Sinisa Mihajlovic shared an 'episode' as players of Hajduk Split and Red Star Belgrade respectively in the 1991 Yugoslav Cup final, which was played as war broke out in Croatia.

In the years since, they have embodied the rift between their nations as exponents of hardline nationalism in the public eye. The perception might not have been fully justified, but the heated-up story of their animosity has kept it alive. They've known each other since childhood but hadn't spoken to one another for more than two decades before finally deciding to put the feud aside for a greater good.

In the end, the Croatia-Serbia game was an anti-climax. Croatia won 2-0 after taking advantage of Serbia's major defensive mistakes in the first half; there were no major incidents to report and the two managers even engaged in what looked like a friendly hug after the final whistle.

Now, as the teams gear up for a rematch, the historical and political implications of the match appear toned down and deflated in importance. While the Zagreb fixture was sold out in a matter of minutes, it's far from certain that Belgrade's 'Marakana' will be full. Sure, Serbia's chances of qualifying having diminished and Croatia are likely to finish second in the group regardless of this result, but there's more to it.

Although there will always be people on either side drawing importance far greater than football from this fixture, while demanding a 'do or die' mentality from their team, the whole nationalism theme seems to have worn out.

But still the focus is once again on the two managers - only this time it's not about their symbolic roles that personified the divide for so long, or how they are reinventing themselves as the unlikeliest of peacemakers. Now it's about the growing awareness of their inadequacies.

Mihajlovic and Stimac are far more alike than either of them would care to admit. As players, they were both perceived as leaders and alpha males – lionised and scorned for it in equal measure. As national team managers they both started off ambitiously, stating their intentions to shake things up, impose discipline and awaken a warrior-like mentality among their players.

They both tried to play the patriotism card, but used it too much and too early – indeed, many of their critics would say they even made a mockery of it.

Mihajlovic was supposed to be a unifying figure in the chaotic world of Serbian football, so long been plagued by the FA's incompetence and corruption, influences of player agents and the unhealthy rivalry between the 'Eternal Rivals', Red Star and Partizan, all of which hindered the national team's progress for years.

There were also rumours he could bring back its two estranged stars – his close personal friend Dejan Stankovic and Manchester United captain Nemanja Vidic, who had both retired internationally the year before, citing a negative atmosphere as the main reason.

That didn't happen, and instead Mihajlovic managed to estrange two other players. Benfica's Nemanja Matic refused to play under him, saying he was being marginalised – although he is now back in the team for the Croatia match.

But it was the case of Adem Ljajic, this summer's big catch for Roma, that sent the biggest shockwaves. After taking up the post, Mihajlovic drew a code of conduct specifying how his players must behave while on international duty, and made every member of the team sign it as a formal agreement. "As a footballer I made mistakes both on and off the pitch," said the manager. "These youngsters should learn from my mistakes, not repeat them."

Among other things, the code requires players to sing the national anthem. "Ever so often did we see our players holding silent when our anthem was played, while the opponents sang theirs very loudly – sometimes even the whole stadium joined up," Mihajlovic explained. "It was always an important psychological advantage for them, even before kick-off."

But Ljajic, who is of Bosnian descent and Muslim faith, reportedly found some of the lyrics unacceptable to his cultural identity (or just didn't bother learning them, depending on who you believe) and didn't sing. He was immediately banished from the team for it. "I love Serbia, but I also respect myself," said the 21-year-old.

The anthem Boze Pravde (God of Justice) makes reference to a Christian God and speaks of a 'Serbian kin', which citizens of other nationalities and faiths might find too exclusive; it is also worth noting that the player's close cousin, Rasim Ljajic, is a high-ranked minority politician in Serbia.

When captain Branislav Ivanovic objected to another point of the code – the one requiring players to applaud the opposition anthem, which he thought was "a bit silly" - he was met with resolute reaction from his manager. "If that's what you think, don't even bother entering the pitch, I don't need you," said Mihajlovic. So Ivanovic decided to humour him after all.

Whether his efforts to unite the team and restore national pride were laudable or silly, Mihajlovic quickly found himself in a difficult position. His qualifying campaign has been disastrous: Serbia lost four of their seven matches and are sitting in the third place, nine points behind their bitter rivals Croatia and 12 behind group leaders, Belgium.

He has also been repeatedly accused of allowing agents to have a large influence on his selection. But the icing on the cake was the story of his fling with busty socialite/reality show contestant Soraja. Mihajlovic, a supposed family man these days, dismissed the story as "crap" - but it has become increasingly clear that he fell out of favour with the Serbian public long ago.

Croatia manager Stimac's methods of uniting the team and the nation under one flag have been more elaborate. He's become known as the 'Facebook manager', because he regularly uses his social network profile to communicate with the fans.

There he also posts updates from his family and religious life, as well as occasionally insulting the visitors who provoke him. Ahead of one match he posted the Rudyard Kipling poem If as his inspiration, apparently not being aware of its tongue-in-cheek implications.

Outside of football, he does what he can to promote what he sees as true values – for example, signing a homophobic petition which aims to define marriage as a 'union between a woman and man' in the Croatian constitution. Yet in one infamous interview he was once branded "gay" by Mihajlovic.

One of the first things Stimac did upon seizing the helm was break with the tradition of training in Slovenia ahead of home matches, on the grounds of "not being patriotic". Now instead of the peace and quiet they had in a picturesque village just across the border, Luka Modric & Co. train in the centre of Zagreb.

But ahead of the match against Scotland in June, he had no problem with taking the team to a largely Croat-populated area of Bosnia and Herzegovina where they trained, hung out with fans and visited Medugorje, a Catholic pilgrimage site.

On their last day of preparations there, dubbed the 'Love Tour' by local media, Stimac appeared before the press with a rosary in his hand and said: "People here would never turn their backs on our team. Many in Croatia did, they didn't have faith in me."

That was typical of Stimac's public appearances: part-martyr, part-righteous patriotic evangelist – but always a fully fledged populist. He started the qualifying campaign with very low approval ratings, and the recurring theme of his tenure has been one man's quest for love and acceptance. Initially he managed to win over some of the critics, but Croatia rarely looked well-organised on the pitch and were rather lucky to get the results they did.

Their luck ran its course when they were defeated surprisingly by Scotland at home, but the truth is it has all been downhill from that Serbia tie.

Even in the second half of the 'grudge' match in Zagreb, Mihajlovic's men dominated as the Croatians, two goals ahead, looked relieved to have the burden of expectations off their chests. Four days later they somehow managed to scrape through in Wales, overturning the home team's lead in the last 15 minutes of the game.

Then came the defeat to Scotland, while the friendlies that followed offered no reassurance – Croatia lost comfortably to Portugal and scraped through with a 3-2 win over minnows Liechtenstein.

Stimac has been severely criticised for his pompous public persona, his 'dinosaur' 4-4-2 formation and his reluctance to recognise the need for a holding midfielder – or even so much as the concept of having one.

So here they are: two frenemies, old-school warriors on their way to becoming pariahs in their final match-up.

Mihajlovic is set to leave at the end of the campaign but defeat against Croatia might prompt him to resign earlier - he's more than aware he isn't wanted anymore. For Stimac a win presents an opportunity for acceptance. A defeat probably wouldn't cost him his job immediately but it would overwrite his only real 'plus' so far and make him even more exposed to criticism.

The derby of blood is now a derby of vanity – and, generally speaking, for the Balkans that actually sounds like progress.