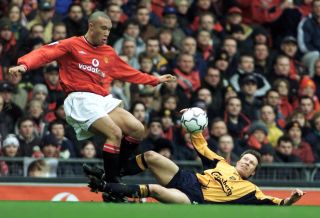 Mikael Silvestre is widely considered one of the greatest defenders of Sir Alex Ferguson's reign at Manchester United. The Frenchman made 353 appearances for the Red Devils, and counts four Premier League titles, the FA Cup and the Champions League among his achievements in the north west of England.

It may come as a surprise, therefore, to know how close the defender came to signing for United's bitter rivals Liverpool in 1999, after deciding to leave Inter Milan.

"That summer, Marcello Lippi arrived at Inter and recruited another wing-back, Grigoris Georgatos, who was a bit older than me," Silvestre tells the Summer issue of FourFourTwo, available online and in shops now. "My game time was going to diminish and I wanted to play. Gerard Houllier had been my coach at youth level in France, so we knew each other well, and he called to ask if I wanted to join Liverpool. He said he wanted me to play left-back for them, and that while the competition would be there, I was in a good position to start most games."

Silvestre reveals a call from Ferguson changed his mind, however, with one particular thing weighing heavy in his decision making.

"Alex Ferguson phoned me a few days later to register his interest," he says. "The choice was easy to make, because United had just won the Treble. Sir Alex was like, “You’re going to play left-back and centre-back – I need you for both positions.”

As fate would have it, Silvestre happened to make his United debut against the club he almost joined. There was no hard feelings between him and Liverpool's manager that day, however.

"I remember that I arrived in Manchester on a Thursday and by Saturday I had already played my first game – at Anfield, of all places, against Liverpool!" Silvestre reveals. "That was madness: I didn’t even know my team-mates or speak the language well. On matchday I had a brief chat with Houllier, who jokingly asked me, “Why didn’t you sign for us?” But he said he understood my choice."

Read the full interview with Mikael Silvestre in the Summer 2020 issue of FourFourTwo magazine, available in shops and online from now. Our new magazine looks at the 99 things you’ve forgotten about the noughties, from battles to beach balls, looking at the decade that revolutionised the game as we know it; we examine the golden generation and where it went wrong for England, look over the extraordinary decade of Thierry Henry, remember the fall of ITV Digital, the highs and lows of Harchester United - the fictional side from Sky’s popular drama Dream Team - and look at the formidable partnership of Kaka and Andriy Shevencko over in Milan. We also chat to Jerzy Dudek, Jimmy Floyd Hasselbaink, Alan Stubbs and Fredi Kanoute.