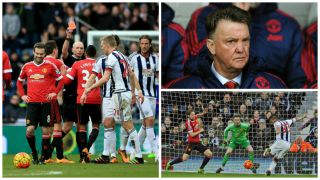 Juan Mata scored the winner in midweek as Manchester United overcame Watford. The former Valencia and Chelsea attacker had been enjoying an extended run in the team as a No.10 and he started this match well, although the positioning of West Brom's central midfielders meant he had to either move into wide positions or very deep to receive the ball.

With just seven minutes gone, he beat three players before unleashing a crossfield ball into the path of Anthony Martial. For the first 20 minutes he was easily United’s most influential player in the final third, even though most of his passes were sideways as he couldn’t find space between the lines or make a final pass behind the defence.

However, it all went wrong very quickly as the Spaniard was sent off for the first time in his career, picking up two yellow cards in the space of three minutes. He stupidly stopped Darren Fletcher from taking a quick free-kick in the 23rd minute, then added another booking just moments later for a daft trip on the Baggies captain and former United midfielder.

“I asked him a rhetorical question: ‘how many red cards have you had?’ None,” said Louis van Gaal after the game. The United manager clearly felt that the player’s past history should have played a part in referee Mike Dean’s decision rather than just the two incidents.

Tony Pulis’s team are always well drilled defensively and the role of their full-backs was crucial in keeping United at bay. Craig Dawson dealt superbly with Martial and caused United issues in an attacking sense as an aerial threat, while James Chester stopped Jesse Lingard from creating much on the opposite flank.

Dawson won four out of five aerial duals in the attacking third and left Martial limping after a strong tackle on the former Monaco attacker on the quarter-hour. With 27 minutes gone, he almost scored with an audacious lob from 40 yards out which sailed just past David de Gea’s post.

In the 54th minute, the Lancastrian was replaced by Sebastian Pocognoli because of injury, with the Belgian taking up his usual left-back role and Chester moving over to the right-hand side, much to the annoyance of Lingard.

The young United winger had a largely unproductive afternoon, as he failed to make any successful crosses and completed only three of his eight attempted take-ons. This was largely due to Chester winning four of five tackles, with an incredible four blocked crosses. The West Brom full-back also won four of his five aerial duels in the defensive area of the pitch to confirm their dominance in this aspect.

United easily commanded possession until Mata received his marching orders, but they found it difficult to break down their opponents' rigid organisation. A man down, Van Gaal moved Martial to the lone striker position, Lingard to the left and Marcus Rashford to the right. This was because the Frenchman is better at holding up the ball and bringing others into play.

“Rashford was not in the match, therefore I changed,” Van Gaal told FFT in the post-match press conference. “I thought that when we play with one striker rather than one striker and a second striker, then Martial is maybe better to play that role and Rashford went to the right side.”

With West Brom having a numerical advantage, United had to play the ball into their lone forward much earlier. Martial still took up wide positions and received the ball on the wings, but the passes into him were longer and more direct.

“I had to see how we were building up in the first phase and in the second phase, at the time that Timothy [Fosu-Mensah] was coming in we were playing only long balls,” confessed Van Gaal, which showed that the team’s directness was a natural change rather than a tactical instruction.

Martial had the team’s only shot on target when he cut inside from the left, although it was easily held by West Brom goalkeeper Ben Foster.

Reports this week suggest that Saido Berahino will finally make his long awaited transfer to Tottenham this summer, but Pulis shouldn’t be too concerned. The youngster has rarely featured this season and although he partnered Salomon Rondon on this occasion, it was his strike partner who shone.

The former Malaga man caused problems for United’s backline throughout, due to his combination of physicality and movement. Rondon created three chances for his team-mates and buried his only opportunity of the game.

“We have looked better with Saido and Salomon, we look more of a threat,” said Pulis. “The testament to Salomon is that he never stops, he is such a fantastic lad and it was a great finish.”

He scored his fourth goal in six Premier League games in the 66th minute, from a Pocognoli cross. Rondon had time to control the ball before hitting a powerful shot on the turn past De Gea. “I need more goals and I’m happy,” the Venezuelan told TV cameras straight after the match.

Despite a recent renaissance, United have won just one of their last eight away league matches. “We have played 60 minutes with 10 against 11 and that’s always difficult I think, but we were not uncomfortable,” said Van Gaal. “We didn’t give too many chances away; one chance and one goal.”