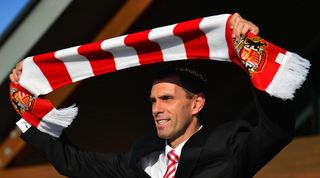 Newcastle United have confirmed the appointment of Gus Poyet as the new manager of deadly rivals Sunderland, in a move that has been warmly welcomed by Magpies fans as divisive and potentially catastrophic.

Newcastle fans will be hoping Poyet continues the work of predecessor Paolo Di Canio, who was given the Stadium of Light hotseat in the spring and was well on the way to fulfilling his instructions before getting the boot two weeks ago.

Poyet’s appointment is the latest in a chain of appointments stretching back to 2004, when the North East foes agreed to pick one another’s bosses. In the intervening years, Sunderland have inflicted roving psychopath Graeme Souness, adenoidal schmuck Glenn Roeder and monochrome dullard Alan Shearer on the Magpies.

Despite the occasional misstep, such as Sunderland’s unexpected promotion under murder-eyed despot Roy Keane, both clubs are thought to be happy with the way they have maintained local bragging rights by systematically preventing their rivals from achieving any degree of progress or stability.

“It had to be Gus Poyet,” said Newcastle United director John Irving. “There were other strong candidates. We were impressed by Kevin Ball’s anachronistic tendencies, and it was fun to imagine Tony Pulis on Wearside. But Gus has never managed in the Premier League before, he falls out with players on a weekly basis, and his last club threatened to sue him for gross misconduct. What could possibly go right?”

Many pundits believe that Sunderland may retaliate by sacking Newcastle manager Alan Pardew and replacing him with wheezy throwback Joe Kinnear, though a number of the Sunderland board are said to be keen to see Pardew continue for as long as possible.

“Sometimes Pardew looks like a progressive, modern coach, but fortunately at other times he looks laughably out of his depth,” a Sunderland insider told FourFourTwo. “Remember that this is a man who decided Javier Mascherano was a poor man’s Hayden Mullins. He can stay.”

The decision to allow Sunderland fans to rename Newcastle’s stadium remains controversial, however, and Magpies fans are planning a demonstration before the next home match at the Jackie Milburn Smelled Of Wee Arena.