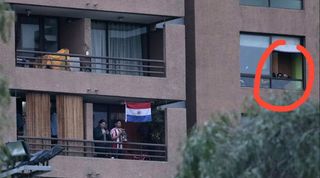 On Thursday night they face fourth-placed Chile, themselves only a point ahead of Argentina and currently occupying the last automatic qualification berth.

But with a huge three points at stake, Paraguay have spotted an unwelcome scout snooping in on their training session ahead of the game – as they duly revealed to the world with a grainy video on Wednesday.

Frankly this is a must-win game for Paraguay, but Chile could end this latest matchday as low as sixth if results go against them.

It remains to be seen whether the spy has uncovered Paraguay’s masterplan – but if you fancy finding out while everyone else is in bed, kick-off is 11:30pm BST on Thursday.