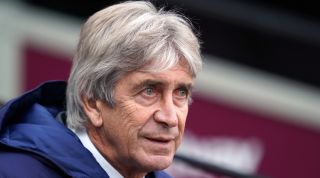 David Moyes knew early on. He realised that his was a short-term assignment with no possibility of permanence. Two years ago, the Scot was West Ham’s glorified caretaker manager, charged with saving them from relegation.

Two years on, West Ham are at threat of the drop again. Moyes realised soon into his tenure that the club had their sights set on an upgrade. Enter Manuel Pellegrini, who won the Premier League with Manchester City as Moyes steered Manchester United to seventh in 2014. Now, surely, Pellegrini should exit. West Ham are 17th, winless in two months, hapless and, at times, lifeless. They have spent £180 million in Pellegrini’s reign and are 11 places below Sheffield United.

If there is something quintessentially West Ham about expensive ambition producing embarrassing failure, about a malaise greater than any one man, there is something Pellegrini-esque about their problems. His passiveness has resulted in a powerlessness to halt a slide as a seven-game run has produced just two points. His greatest folly is a man who has conceded 18 times in his last seven starts, four of them to League One Oxford.

The wretchedness of Roberto, one of the worst goalkeepers in Premier League history, could seem a simple case of misfortune, with the absence of the injured, excellent Lukasz Fabianski. Except it is a symbolic failure of Pellegrini’s management. His sidekick Mario Husillos was appointed director of football, a position he also filled when Malaga, featuring Roberto in goal, were relegated. They wanted to sign the Spaniard as first choice, got lucky when the superior Fabianski was recruited instead, only for cronyism to be exposed when the Pole was injured.

Roberto has been at fault for at least seven goals in the last five games. An inability to deal with crosses rendered him unsuitable for English football; defenders’ reactions to his flapping amount to a public vote of no confidence. Pellegrini’s stubbornness has meant he has kept his place. He is no Martin Demichelis, a much-mocked pet project whose selection seemed a case of favouritism but who offered some justification, but a liability.

And the reality is that Fabianski had served as a one-man shield, hiding the flaws of Pellegrini’s side. The Pole made the most saves in the division last season; a feat by him and an indictment of others. They left him exposed; now they have done likewise with Roberto. West Ham have permitted 41 shots on target in five matches.

It speaks to a lack of organisation. Marco Silva happily admitted to targeting the space either side of Declan Rice in midfield when Everton beat West Ham; Jose Mourinho followed a similar ploy when Dele Alli flourished on Saturday. Structural problems have been combined with lethargy. The manager has not addressed the culture of a club where too many have taken the money and not run.

West Ham have been outrun in every league game this season; when Everton covered 9km more, it amounted to an embarrassing distance in effort. Pellegrini’s grey drabness, his world-weary persona may camouflage his qualities, but his team looked one coached by the caricature of a charisma vacuum with few motivational skills.

It is damning that two of the few to acquit themselves well during a dreadful run are the lesser talents; Robert Snodgrass, who roused the Hammers when they went 3-0 down to Newcastle, and Michail Antonio, who had a similar effect at the same scoreline against Spurs.

The budget has been used to acquire players of ability and create a team that is less than the sum of its parts. Felipe Anderson, Manuel Lanzini and Pablo Fornals have not delivered a league goal between them this season. Three of the £45 million Sebastien Haller’s four have come against teams in the relegation zone.

Where relentlessness has been required, inconsistency has instead been ingrained. West Ham’s best – flagship wins against Arsenal and Tottenham last season and Manchester United both this year and last – is very good, their worst abominable. They have contrived to start successive seasons with 4-0 and 5-0 reverses; even accounting for difficult fixtures, it scarcely suggests the appropriate focus. Pellegrini’s first substitution – taking off Rice at half-time at Anfield and leaving the immobile Mark Noble and Jack Wilshere exposed against a more athletic Liverpool trio – set the tone for some questionable decision-making. Or perhaps giving Wilshere a three-year deal had already done that.

Now the onus is on a board that gave Avram Grant too long. The reasons to persist with Pellegrini may entail the cost of paying him off and the question of who will replace him. Yet four genuinely appalling performances in the last five scarcely suggest a manager with the ideas, drive or dynamism to change their fortunes. At 66 and with a fondness for ageing teams, he does not represent the future, but he never did. He was appointed for his CV, rather than what he would do, for the reflected glory of getting a Real Madrid and modern-day City manager. But if West Ham dreamed of the top four, they are in the bottom four. It is not just fear of sliding one place lower that should end Pellegrini’s tenure.

ANALYSIS: Why Arsenal's patience with Unai Emery has to run out sooner rather than later