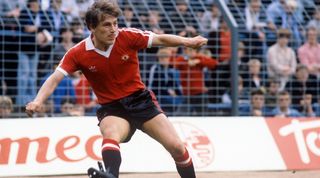 Manchester United were in the second division when they signed winger Steve Coppell from Tranmere Rovers in 1975. With average crowds of 48,000, Tommy Docherty’s side were still the best-supported team in the land with the most boisterous and raffish fans too, but a second division team no less.

That United team needed rebuilding. They’d fallen far after the legendary Matt Busby stepped down after a quarter of a century. United would rise again after working through several managers in succession, but there are clear similarities with the present, as in Coppell’s description of Liverpool as “so good, albeit with a different style. They would spend the first 15 minutes passing the ball back to the goalkeeper. You couldn’t get into the game against them.”

I loved Coppell as a kid and wanted to be him, wanted to have my hair like his and score goals like the Scouser did. Strong and quick, he played every single week and his 206 consecutive games (from 395 appearances in total between 1975 and 1983) set a United record never likely to be broken. Coppell cost £40,000, a bargain even then.

They say never meet your heroes, but Coppell was well worth speaking to in later years because his story was so different.

“I was a full time economics student at Liverpool University who played part-time for Tranmere,” he recalled. “Football was a bonus as I’d resigned myself to not making it. Mark Palios was an older student footballer at Tranmere and I’d often take his guidance.” Palios, a former FA chief executive, now runs Tranmere and will doubtless be happy with the £400,000 from Sunday’s FA Cup tie with United.

A couple of Liverpool directors had been watching him, but this was a time when United moved quickly to get their man. “Halfway through my second year at university I got a call telling me that Manchester United wanted to buy me and that Tranmere had agreed a fee. It was like a dream.”

Coppell moved to Manchester but trained alone in Liverpool where he continued to study, apart from one midweek session in Manchester.

“If United didn’t have a midweek game I’d play in net in the university interdepartmental league,” he laughed at the memory. “We got to the cup final, losing 6-1 to geography, not one of my better games!” United at the weekend and a university match midweek became the norm.

I’ve asked a hundred of players to describe what it’s like to play at Old Trafford and Coppell’s description of his debut there is one of the best.

“It was beyond a fairy tale,” he said. “And despite winning trophies, that day was my highlight as a United player. My heart was jumping out of my chest and I’ve ever had another experience like it. I wasn’t running; I was floating across the grass. Words do not do the experience justice; it was a drug-like euphoric trance. I’ve had a few operations, and it was like that little pleasant stage after the anaesthetic. Only multiplied by a hundred.”

The present United team still needs major surgery, still needs new players, and still needs to shift old ones. Dan James would be the closest to Coppell that they have and they could do with a few more like him.

The 6-0 FA Cup win and a decent away day at Tranmere once again gave United fans a boost, however temporary. The cup is rightly still important at the club, the treble valued greatly. Who cares if it’s not as lucrative as other competitions?

HISTORY Who has won the most FA Cups? The 12 most successful clubs in the world's oldest competition

It’s also probably the best chance of a trophy this season right now and United’s cup form – P13 W9 D2 L2 (and one of those defeats was in Astana, when the team were already through) – puts their lacklustre league performance to shame.

Many were waiting and hoping for United to bomb spectacularly on Sunday but they didn’t oblige. Instead, they blitzed Tranmere – but let’s not pretend that it wiped away the damage from five defeats in a month. Poor form has sparked fan dissent, United slipping below their supporters’ pretty realistic expectations about this season.

Fury remains towards the Glazers and Ed Woodward, and that’s not going away any time soon. Fans still sing Ole Gunnar Solskjaer’s name, and though of course they have reservations, they’re trying to support a man with a very difficult job.

Opinion is fractured, dis-united – as it always is. Online talk of a walkout protest at Saturday’s Wolves game drew a thousand contrary opinions - but almost all agree that the enormous sums the Glazers have taken from the club following a takeover which should never have been allowed to happen is a disgrace.

What protests were made were spontaneous. That spontaneity from fans can make Old Trafford a special place when fans roar their team forward because that feeling comes from the heart. Matchgoing fans have taken a long time to turn, after much patient support, but they’ve had enough and that spontaneity provoked the anti Glazer chants heard at home to Norwich and Burnley.

How do United get out of this? They don’t, at least not immediately. Unless they sell up, the Glazer issue isn’t going away any time soon, though further victories and new signings can lift the mood.

But beating City away on Wednesday to reach Wembley is even more implausible than December’s win there since talisman Marcus Rashford, scorer of one of the three goals, is out. Paris away was an even bigger mountain which United scaled thanks to an improbable comeback. The sound of straws being clutched there is deafening.

Fans of smaller clubs like Tranmere or Macclesfield might raise their eyebrows at United’s problems. Macclesfield, close to where many United and City players live to the south of Manchester, look to be as perilous a position as Bolton or Bury have been with players going unpaid.

As a journalist and football fan I’ve both written about smaller clubs and paid to watch them play many times and it genuinely saddens me. I went to Macclesfield to write about them last season. Most people couldn’t care less about United’s football first world problems, but they are still relevant problems.

The transfer window is still open too. United still want to sign Sporting’s Bruno Fernandes and it’s understood that he wants to move, but a compromise is needed since the gap in their valuations remains too far apart. Fernandes, described to me by a rival Benfica coach last week as a “box to box midfielder who scores and assists” will be welcomed, no doubt but given the injuries United are also looking at loan options. Any new players would help what has quickly become an injury hit, exhausted side.

And, for the longer term, United can look at their potential next Steve Coppells, players like Birmingham City’s Jude Bellingham who fit in with Solskjaer’s plans for a young, speedy, exciting, counter-attacking side like Docherty’s in the mid ‘70s.

LIST 5 things you should know about Tottenham target Steven Bergwijn