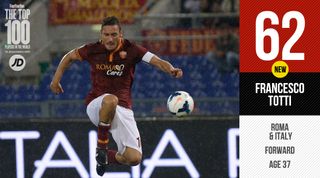 The morning after Napoli lost 5-1 to Werder Bremen in the UEFA Cup in 1989, Careca opened the pink pages of La Gazzetta dello Sport and went to the player ratings. Running his finger over them, his index stopped at his name. The rosa had given him 4 out of 10. Their verdict: He’d been “impotent” and had played like a “rabbit.” Careca was furious. The next time he saw the journalist responsible, a fight broke out. Touchy, eh?

It wasn’t even the worst pagella that La Gazzetta has ever printed. Milan Rapaic would be awarded a 1 after he deceived a referee into thinking he'd scored a precious equaliser for Perugia with his chin and not his hand against Napoli in 1997. A year later, Paulo Sousa received the same mark after he played terribly and got sent off in Inter’s 3-2 defeat to Bari. Not even his looks, nor the cut of his mane could help him. The pagellista judges on performance and performance only.

If players in Italy are really disgruntled by their ratings they should turn their frustration on Aldo Missaglia and Gigi Scarambone. These were the men behind Milaninter, a weekly fanzine sold at San Siro on matchdays. One issue a new feature appeared: the pagelle, an invention that Missaglia and Scarambone are both credited with on the peninsula.

They were a hit with readers and even some players. Nils Liedholm collected them - of course he would, Il Barone didn’t miss a single pass for years. When he eventually did, San Siro applauded. So popular did the pagelle become that La Gazzetta introduced them. This was 40 years ago. Others papers would too, and the great journalist Gianni Brera turned the short, sharp and witty justifications accompanying them into an artform.

Hard to please, only seven players have received 10s in that time: Oleg Salenko after he scored five goals for Russia against Cameroon at USA `94, Alessio Scarpi, the Cagliari goalkeeper, after he saved the life of his teammate Gianluca Grassadonia who collapsed during a game at Udinese in 1998, Roberto Baggio following his display for Inter in a play-off to qualify for the Champions League against Parma in 2000, Marcello Lippi, Gigi Buffon and Fabio Cannavaro for their part in Italy’s World Cup triumph in 2006 then Robert Lewandowski for his poker against Real Madrid this year.

The 10+ that Diego Milito earned after his brace against Bayern Munich in the 2010 Champions League final sealed a historic treble for Inter remains the highest ever bestowed upon a player. Milito wasn’t just great that night, but throughout the campaign, scoring the Scudetto clincher and the winner in the Coppa Italia final. He had an average of 6.59 in Serie A that season. No one did better. Few have had better years in terms of trophies won, but with regards to pagelle many have averaged higher.

The 6.94 Michel Platini achieved while playing for Juventus over the duration of the 1983-84 season is still the highest posted by anyone in the last three decades. Occupying the throne more than anyone else since Le Roi retired is the King of the Rome. Francesco Totti has had the highest average in Serie A in 2001-02 [6.75], 2005-06 [6.67] and 2012-13 [6.56]. No one other than him has been rated the league’s best player on three separate occasions. That’s some hat-trick.

You have to marvel at it. Three years ago, I wrote a piece during FourFourTwo’s Playmakers Week on why Totti was “My Perfect 10.” I went into how he was the latest and greatest in a long line of veri, romanisti, romani - true, Roman, Roma fans - after Attilio Ferraris IV, Fulvio Bernardini, Amedeo Amadei, Egidio Guarnacci, Agostino Di Bartolomei and Giuseppe Giannini to captain the team he supported as a boy.

I mentioned how winning a Scudetto in Rome is “worth 10 in Turin,” and raised the point that, with the exception of the period between 2000 and 2003 when Cafu and Gabriel Batistuta were in the side, he alone had to carry Roma on his shoulders for the most part. His great contemporary Alessandro Del Piero, to whom he is so often compared, got to play with Roberto Baggio, Zinedine Zidane, Pavel Nedved and Fabio Cannavaro - that’s four Ballon d’Or winners - at Juventus between 1993 and 2012, among many other world class players.

The piece also explained how at 30 he reinvented himself, changing position from out-left or No.10 to play as a false 9 under Luciano Spalletti in a 4-6-0, a system he made possible that Manchester United, among others, soon imitated. After scoring 26 league goals and winning European Golden Boot in 2006-07, I wondered what if Totti had always played there. How many goals would he have scored? Totti admitted to asking himself that question earlier this year after he became Serie A’s second all-time top scorer behind Silvio Piola.

Totti says he won’t stop until he catches him. With 230 to his name, he requires 44. The new contract Totti signed in September gives him another couple of years and while he may not be as quick or as mobile as he once was he is still world class.

For instance, it’s enough to think that piece of skill he showed in a 3-0 win against Inter at San Siro in early October, the control and swivel, how he turned Alvaro Pereira on the edge of his own area, lifting the ball across his body, opening himself up, finding his balance again and then, before the ball hit the floor, prodding it through to Kevin Strootman who went up the other end and set up Alessandro Florenzi to score. Magnificent. Simply magnificent.

If he’s in decline, then you could have fooled me. Totti has scored or assisted in every game he’s played for Roma this season. It’s no coincidence that they could only extend their season-opening winning streak by another two games from eight to a record breaking 10 after he succumbed to a muscle injury against Napoli in mid-October.  Without him, their performances have become less fluent.

To still be performing at such a level at 37 is nothing short of remarkable. And yet, as was the case with Zlatan Ibrahimovic, there are those who remain bafflingly unconvinced.

How can a player be overrated when the sticklers at La Gazzetta - a Milanese paper, not a Roman one - have calculated through their pagelle that no player in Serie A has performed better on average over the last 20 years? TWENTY YEARS! That longevity, that continuity, the context. Heaven help the non-believers. For it must be a joyless existence. As the banner in the Curva Sud reminds us: if there’s “no Totti”, there’s “no party”. Awarded a 9 by La Gazzetta for a performance against Bari four years ago, his highest pagella for a single game, Totti still gets top marks from the Romanisti. For them, he remains the perfect 10 and justifiably so.