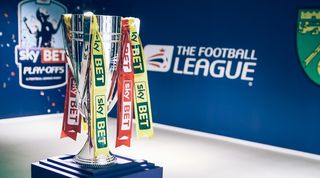 Oh we’re back, baby. Some red-hot action at Kenilworth Road on Friday night to kick off the new campaign, as Luton host Jonathan Woodgate’s Middlesbrough.

Each of those sides has very different expectations for the campaign to come – although who really knows with the Hatters any more, having already managed back-to-back promotions?

Leeds are the bookies’ favourites having made the play-off semi-finals under Marcelo Bielsa last term, but the Whites will be pushed hard by several other ex-Premier League sides with points to prove. But we start at the bottom with…

FourFourTwo's Season Preview: out now! Get it here, and then discover what else is in the mag

After a highly impressive 8th-placed finish in 2017/18, the Lions ended the last campaign one spot above the relegation zone. They’ve also lost the services of Lee Gregory, who hit double figures in each of the last four seasons. Those goals may be sorely missed at The Den.

Garry Monk’s summer departure is a real cause for concern – he’d done an impressive job in difficult circumstances, keeping the Blues comfortably in mid-table. They struggled before his March 2018 arrival at St Andrew’s, and could struggle again now he’s gone under Pep Clotet – formerly, assistant at Swansea and Leeds.

Which QPR will we get in 2019-20? The woeful lot who started last term by losing 7-1 at West Brom, the brilliant team that flew up the league mid-season, or the dismal mob that ended the campaign? If they’re anything like the side from January-May, expect trouble.

The loss of midfielder Joe Aribo to Rangers is a blow, and the bizarre fiasco over Lee Bowyer’s new contract was a little worrying to say the least. But the ex-midfielder has done a terrific job and can help the Addicks survive with signings like defender Tom Lockyer, Leyton Orient hotshot Macauley Bonne and MK Dons midfielder Chuks Aneke.

Portuguese head honcho Jose Gomes signed well in January to help the Royals surge away from relegation trouble, but those arrivals were only temporary. They’ve since signed centre-back Michael Morrison (decent) and freebie Charlie Adam (less so) this summer, and likely face another battle against the drop this time around.

It’s been a bonkers 12 years for Luton supporters. Their team was relegated from the second tier in 2006/07, before rocketing down to non-league. They’ve now fought their way back thanks to some highly impressive football which should keep them in the Championship for 2020/21.

The Latics were pitiful on the road last term, losing 16 of 23 away matches. Paul Cook’s Latics were superb at home, however, winning 11 and losing just four. The ex-Portsmouth gaffer has improved sides wherever he’s been, and should be able to keep Wigan away from relegation again.

The Tykes were only relegated on the last day two years ago, then appointed former Hannover boss Daniel Stendel and secured an immediate return to the second tier. With no Joey Barton around to wind him up this season, he could help them adapt to the Championship.

Nigel Adkins did an excellent job moving Hull from bottom of the table to play-off contention last term, so his departure was a blow. Grant McCann lacks experience in the Championship but impressed at Doncaster, having guided Rovers to the League One play-offs last season.

Revealed! Which Championship teams have the hardest – and easiest – starts to 2019/20?

Swansea’s finances haven’t looked entirely promising since dropping out of the Premier League, and that’s putting it kindly. Now they go into this season without both Graham Potter and Daniel James, making for a tricky debut campaign where new man Steve Cooper – offspring of ex-top-flight referee Keith – is concerned.

Considering Venky’s are still in charge, Tony Mowbray’s two full campaigns as Blackburn manager have been miraculous. First he halted the decline by winning promotion from League One, then steered Rovers to 15th in their first season back in the Championship. Expect another solid, if unspectacular, performance.

After a poor start, Alex Neil eventually guided North End to a comfortable mid-table position in 2018/19. He’s since signed defender Patrick Bauer and dragged David Nugent back to Deepdale, and Preston should have enough about them to be there again. Just not quite enough to trouble the play-off spots.

When your season’s highlight is a mid-game interview with Martin from Wakefield, you know it’s not gone well. Last season was dreadful for the Terriers – they were long gone early on after winning only three games, and finished 20 points from safety. It’s difficult to envisage a speedy top tier return.

Steve Bruce quietly did a solid job after taking over as the Owls’ boss in February, but pre-season chaos descended on Hillsborough with his acrimonious departure to boyhood club Newcastle. They still have match-winners and Keiren Westwood is an excellent No.1, so the play-offs aren’t impossible.

In hindsight, maybe Tony Pulis was never the right choice as Boro manager – a relegation-battling specialist, suddenly expected to win every week. Anything could happen under rookie replacement Jonathan Woodgate, but the club has drifted since the drop in 2017.

Bees manager Thomas Frank quit former club Brondby after his chairman criticised him on a fans’ forum pseudonymously. Lucky for him, he’s had no such problems at Griffin Park. Frank should keep them in the top half after a solid summer of recruitment, having stabilised things after Dean Smith’s departure to Aston Villa.

Losing Frank Lampard to Chelsea is undoubtedly a big loss for the Rams, as were the departures of Mason Mount and Harry Wilson at the end of their loan spells. It’ll be a challenge to make the play-offs, but Phillip Cocu has the credentials to put them in the promotion mix.

8 Championship players we can’t wait to watch next season

Ranked! The 10 most interesting Championship signings of the summer

The Potters finished 16th as the Championship’s most disappointing team last term, following relegation from the Premier League. They also lost only 13 matches – the same as Leeds. This will be Nathan Jones’s first full campaign, and signings like Nick Powell and Lee Gregory suggest his side will be back competing for promotion.

Any Championship side that can splurge £8m on a defender has to be taken seriously. Granted, they got £13m from Bournemouth for defender Lloyd Kelly, and are about to cash in for £22m on Adam Webster, but they’ve invested in Tomas Kalas and a number of other signings. This could be the year they make the top six.

On paper, the Cottagers should be pretty strong in the second tier – Aleksandar Mitrovic, Anthony Knockaert and Ivan Cavaleiro represent a fierce frontline – although on paper, they shouldn’t have been so flimsy for much of last season in the Premier League. Scott Parker sparked a revival once it was too late, but has to prove he can do it over a full campaign.

The Bluebirds have been through a difficult time since the death of Emiliano Sala, but concluded their Premier League campaign with pride – a brilliant win at Old Trafford – and have retained Championship master Neil Warnock. They should be in with a good shout once more.

Last season ended agonisingly, but where there’s Marcelo Bielsa, there’s hope. While the Argentine remains at Elland Road, the West Yorkshire club can be confident of launching another automatic promotion push – and finally get over the line this time. The big question is how their defence will cope without centre-back Pontus Jansson.

West Brom had club stalwarts at the helm in Darren Moore and James Shan last term, but both lacked experience. There’s no such problem now, and Slaven Bilic could make the same impact as he made in his first season at West Ham. Who will be the Baggies’ Dimitri Payet?

FourFourTwo's Season Preview: out now! Get it here, and then discover what else is in the mag