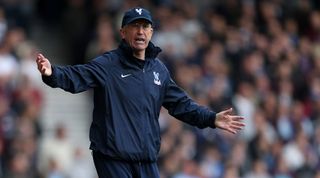 Crystal Palace manager Tony Pulis has continued his impressive season by proposing a logical solution for the tensions in Ukraine.

Pulis received something of a muted reception when he replaced Ian Holloway, with Palace looking destined for the Championship. The ex-Stoke man’s reputation had been tarnished in the past by his tendency to confront star strikers while naked, a mishap that led to a baseball cap becoming stuck to his head for more than six years, and his insistence on managing Stoke.

But Pulis has managed a remarkable turnaround, guiding Palace to almost certain safety, accosting his players only when he’s wearing pants, occasionally jimmying his cap off and rarely making any contribution to the management of Stoke.

Having emerged as a talented football manager, it now seems there’s no end to Pulis’s talents and reports suggest that he’s outlined a mutually acceptable solution to the current tensions in Ukraine while fly fishing with friends in Bedfont Lakes near Ashford.

“A few of us lads are just sat around having a couple of beers and obviously Ukraine’s entered into the conversation,” a friend of Pulis told FourFourTwo.com. “Clearly it’s a thorny issue, but Tony’s had a think and come up with a diplomatic solution that, with some finessing, would almost certainly be welcomed by all parties.

“I’ve got to say the P-Unit [Tony Pulis] is on fire at the moment. It’s like there’s nothing he can’t do, and that includes keeping a football team up or taking a hat on and off like a normal man.”

There are now high hopes for Pulis’s debut R&B album to be released next week, entitled [Pul]Is This Love?, although some reviews have suggesting too many of his verses are reliant on rhyming ‘you’ll be mine’ with ‘stoppage time’ and ‘Pulis’ with ‘pubis’.