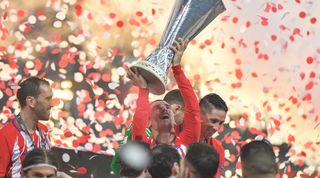 Arsenal vs Chelsea, eh? The Arsenal and, well, just Chelsea.

Another English name on the trophy, to join the likes of Liverpool, Tottenham, Manchester United and... well, Chelsea again.

Ahead of tonight’s final, we want you to name every club that has won the Europa League or UEFA Cup since its inception. We’re giving you how many trophies each team has won, what country they’re from, and six minutes to get as many as possible.

Just fill in the clubs, then let us know how you get on @FourFourTwo – we'll retweet your scores (just don't give away answers).