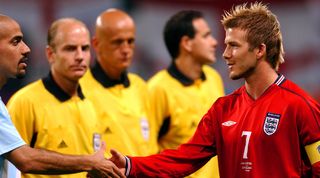 If you can’t name the sides that England have been matched with in the current World Cup, we’re a bit worried about how you’re feeling this summer. But what about the foes of England’s past?

This is every team the Three Lions have faced in a major tournament, from the 1990s to the present day: win, lose or draw. Of course, you’ll notice that the 1994 World Cup and Euro 2008 are missing because England – ahem – decided to sit out those tournaments.

But they played at least three group games in every other tournament and sometimes even added some knockout ties too, just so they could practise losing on penalties etc. Not in 2018, mind you. Roar.

Eight minutes are on the clock, then let us know how you do @FourFourTwo – we’ll retweet the best scores, if you don’t give answers away. Challenge some friends while you’re at it...