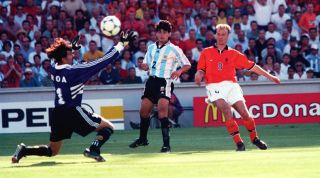 10 minutes on the clock, 75 players to guess across the 15 categories we've listed.

The 1990s belonged to Dennis Bergkamp.

The Dutch legend made his international debut at the start of the decade and over the years, he netted 37 goals for his country - not bad considering he was always a better creator than finisher.

In that timeframe, the non-flying Dutchman chiseled his name in history as one of Europe's greatest footballers ever - let alone just the Netherlands'. He scored some beautiful goals, too. But who were they against?

We've listed each of the Iceman's Dutch strikes - it's up to you to tell us who they were against.