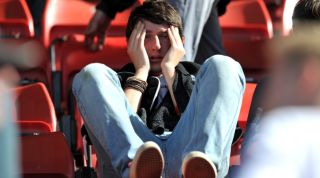 Huddersfield could begin to say their goodbyes this weekend, after an unexpected two-year stay in the Premier League.

Should results go the wrong way, we could be seeing Match of the Day pictures of players crouching forlornly on the pitch (football’s inexplicable indicator of sadness) while Terriers fans use blue-and-white scarves to mop up their tears. The great big EFL in the sky beckons.

Should it come to pass (and it will), this will be Huddersfield’s first relegation from the Premier League since its inception in 1992.

Three teams slip away from the top division’s promised land each season (except for 1994/95, which greedily spat out four clubs) – but can you name them all? Plenty of sides famously lead a yo-yo existence, so this will take a lot quicker than you think to rack up the points – but there’s always one you forget, isn’t there?

We’re giving you seven minutes to get to 79. Let us know how you get on at @FourFourTwo and make sure to challenge your mates. Good luck!

LIST The 8 worst Premier League signings of the season