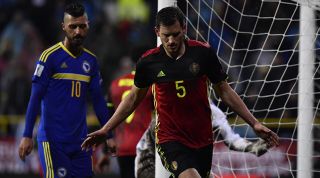 While 50 caps generally gets you into a national team's hall of fame, 100 appearances is the true mark of above-and-beyond service for your country.

Eighteen of the players below boast that mark – and there’s room for them all to add to their total. For this is a list of the top active appearance-makers for 30 national sides (there are 31 answers, however, as Chile have two players on 118 caps).

One note before you start naming these grizzled stalwarts: active is defined as currently playing and available for national selection. So international retirees such as Zlatan Ibrahimovic, Wayne Rooney or Bastian Schweinsteiger don’t count. At least until they try to make a heroic comeback just in time for the World Cup (we’re look at you, Zlats).

Seven minutes are on the clock, and as well as each player’s current cap total and nation, we’ve included the league they currently play in at club level. Let us know how you fare @FourFourTwo, then challenge some fierce rivals/old chums while you’re at it.

(Note: Adblockers can stop you seeing our quizzes. Please turn them off while you’re here. Thanks!)