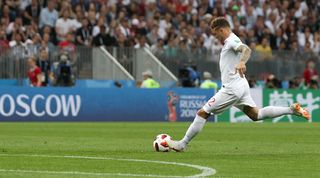 So, that’s that. England now get to play in the most heartbreaking match in football – the third-place play-off – rather than the World Cup final, which will be contested by France and Croatia. You probably knew that already.

However do you know every England player to score in a major tournament over the last 25 years? From Euro ’96 to Russia 2018, a total of 31 England players have scored in a World Cup or European Championship - including the half-dozen players who’ve added their names to this list this summer.

We’ve put six minutes on the clock – let us know your score @FourFourTwo – we’ll retweet the best, if you don’t give answers away. After that you can have a lie down. And maybe a little cry. Nobody will judge you.