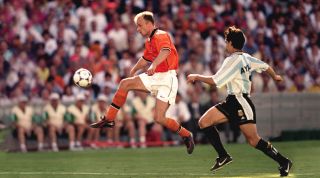 Seven minutes on the clock, 30 names to guess - we've even listed the years that they turned out for their country.

It's four years today since the great Johan Cruyff passed away.

Cruyff left us with so much more than memories too. The flying Dutchman was the face of Total Football, the leader of the greatest side to have never won the World Cup, and he revolutionised Barcelona in his image. He laid the foundations of modern football.

When we think of the Netherlands, we think of sophisticated football. Of the Ajax academy, of intelligent players and of beautiful attacking play. That's all thanks to Cruyff.

But did you know that the man himself isn't one of the 30 most-capped players from the Netherlands?

That's the only help you're getting - we want you to name the Oranje's top appearance makers - and you've got ten minutes to do it.