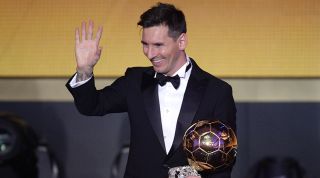 Yawn and indeed, groan. We jest, of course: these two have dominated European football at an astonishing level for the last 10 years, justifiably hogging/sharing the Ballon d’Or during that period.

But times are a-changing – and in 2018, it’s Luka Modric who’s a whopping 1/8 favourite for the prize, having helped steer Real Madrid to a third consecutive Champions League title and Croatia to the World Cup final.

So ahead of the Croatian’s inevitable crowning on Monday night, we’re recalling football’s ‘forgotten’ men of the last 10 years; those who enjoyed fine years without the recognition of a shiny trophy for their mantelpiece. There are seven to name, one of whom finished third three years running.

Since this is a tiddler compared to usual, you’ve only got four minutes to get this done – ample time we think you’ll agree, so it’ll be down to fastest fingers first for a place on our daily Twitter leaderboard. When you’re done, tell us @FourFourTwo and we’ll include your name in lights (or just characters, if all else fails).

THEN READ... Ranked! The 12 best players never to win the Ballon d’Or

(Please note: Turn off those adblockers! They might block our quizzes too, and nobody wants to see that Clive.)