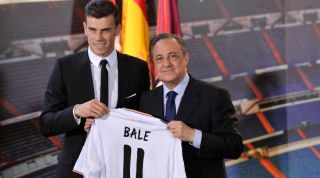 Will they? Won't they? Football's long-running romantic saga that has kept us gripped for years is finally over. The Ross and Rachel of the footballing world have finally got together. Eden Hazard has moved to Real Madrid.

It's set to be a big summer at the Bernabeu. After a disappointing season, Zinedine Zidane has been brought back as manager, apparently on the understanding that he can spend big over the next two months. And when Madrid spend big, they spend big.

Hazard is unlikely to be the last big recruit before next season starts. In fact, he's not even the first: there are three more signings on this list that have joined since the season's end a few weeks ago.

We’re giving you 10 minutes to name as many of Real Madrid’s 50 most expensive signings as you can, via the transfer fee and the selling club.

Anyway, have a crack, then let us know how you got on @FourFourTwo. Then challenge some of your pals to best your galactico-sized total. Vamos!

“With a single touch, he silenced a stadium.” Why I love… Hatem Ben Arfa

Quiz! Can you name every player used by England in the 2018/19 Nations League?