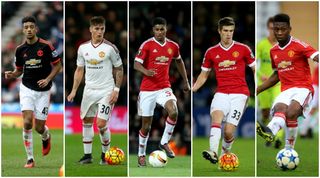 Louis van Gaal has handed first-team debuts to 14 players since becoming Manchester United manager in 2014. An injury crisis at Old Trafford saw six academy products make their senior bows in February alone, while many other youngsters benefited from playing time earlier in the campaign.

"It is the culture of Manchester United, that's why I think they took me as a manager," said Van Gaal after his youthful side beat Arsenal 3-2 last month. "And it is easier to show youngsters what to do than senior players, who have their own opinions. I am like a teacher and these young players can learn a lot."

The injury problems that have befallen Luke Shaw, Marcos Rojo and Matteo Darmian led to Borthwick-Jackson receiving an extended run in the first team until his own fitness problems ensued. The left-back was handed his first competitive appearance against West Brom in November, before making his full debut in the 2-1 defeat to Bournemouth a few weeks later.

The 19-year-old, who was replaced at half-time against Shrewsbury in the FA Cup and has recently suffered from knocks and illness, is strong in possession and likes to advance up the pitch to provide crosses on the overlap.

Borthwick-Jackson’s positioning is perhaps his greatest attribute, with his tendency to be in the right place at the right time to intercept passes and block shots already coming in handy. He still needs to improve his tackling, but it is notable that he averages a better key pass rate than either Bastian Schweinsteiger or Memphis Depay.

Borthwick-Jackson assisted Lingard’s opener against Stoke in February, while misplacing only five passes from a possible 41 attempted.

The former Uruguay U20 international has impressed in the last month with his ability to maraud into the attacking third and help his team-mates in advanced areas. Varela was heavily involved in United’s first two goals against Arsenal, with his high energy levels and good attitude ensuring he doesn’t shy away from his defensive work.

Varela provides an assist for Rashford

His relative lack of height means he can be exposed from long diagonal passes and set-pieces, while he has the typical South American tenacity that can occasionally lead to him overstepping the mark. That’s to be expected, though, and his desire to get stuck in - the 22-year-old made three tackles and four interceptions against both Arsenal and Watford - is certainly more of a positive than a negative.

“He’s going forward, he’s defending well, he’s being aggressive and he’s performing like he has been playing for 10 years before,” team-mate Juan Mata told MUTV. Varela has featured on a number of occasions in cup competitions for United and could be a decent understudy to Darmian in the next few years.

The defender has played centrally in a three-man backline and in a back four this term, while also deputising at right-back. McNair likes to tackle and his ball retention is very good, as he demonstrated against Bournemouth by surprisingly completing more passes than anyone else on the pitch.

His first appearance of the campaign came in the 1-1 draw against Leicester, a game in which his display was criticised by his manager. “We gave the ball away because McNair thought he was a striker at that moment and then the channels were open and they could run them,” said Van Gaal.

His game time has been limited in recent weeks, but the Dutchman still sees him as an important member of the squad; the 20-year-old was wanted by a number of Championship outfits in January, but the United manager and board refused to sanction a loan move.

The unfortunate injury suffered by Anthony Martial in the warm-up gave Rashford an unexpected chance against Midtjylland. The striker’s United career couldn't have started any better, as he scored two goals in two attempts in the Europa League clash with the Danish champions.

The fairy tale continued when he repeated the feat against Arsenal just three days later. “I can imagine the first game that he did that because he is a striker and he comes into situations to scores goals,” said Van Gaal. “In the second match, he has to do also what the manager wants him to do and he did it fantastically.”

With Wayne Rooney still out, Rashford is likely to continue to start up top, but unreasonable expectation levels should be lowered for the sake of his development. His composure and clinical touch in front of goal is exceptional, while his pace and clever movement suggest he can beat opposing defenders one-on-one, but there’s still plenty of work to be done regarding his all-round game.

8 of the best European battles of Britain

The utility man introduced himself to the Old Trafford faithful as a left-back in the last 30 minutes of the win over Arsenal, and then made his full bow just three days later in the centre of defence as United defeated Watford.

Daley Blind could be seen shouting instructions and pointing in the 18-year-old's direction in the victory against the Gunners, with Fosu-Mensah’s exuberance seeing him wander into midfield areas at times.

In the long-term, his physical stature suggests he may be better served as a centre-back or holding midfielder. Fosu-Mensah was successful with three out of five tackles and made four interceptions in his battle with Watford duo Troy Deeney and Odion Ighalo, with his adaptability was on show when forced to make challenges higher up the pitch.

Fosu-Mensah is strong in the tackle, decent in the air and likely to feature much more as United’s campaign reaches its climax.