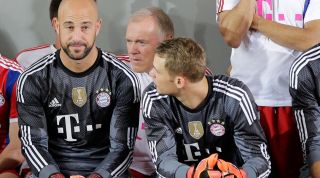 Reina joined the German champions last week following a £2 million switch from Liverpool, where he made nearly 400 appearances. He spent last season on loan at Napoli, but failed to agree a permanent deal after the Italian club was not able to guarantee him second-team football.

"This Bayern move is a dream come true for me," Reina told FourFourTwo.

"I'm so excited to add my name to the list of players like Bernd Dreher, Stefan Wessels, Tom Starke and others who I had to look up on the internet. Everyone has made me feel so welcome, especially the fans. They've shown me nothing but wariness and indifference, which has been lovely."

Reina was on the bench for the first time as his side lost the German Supercup 2-0 to Borussia Dortmund, but despite the defeat the Spanish keeper was delighted to be back doing what he does best.

"The result was a shame, but I was just pleased to be in there," he said, indicating the dugout. "Ever since I was a little boy, all I wanted was to wear a famous club's tracksuit, to feel the hard oak under my thighs, and to return my pristine jersey to its hanger at the end of 90 minutes' sitting down.

"I used to imagine going to the manager and saying, 'Am I playing today, boss?' and him saying 'No.' At last, my dream is a reality."

Bayern's first-choice goalkeeper is Manuel Neuer, by common consent the finest stopper in the world, but Reina had some words of warning for the Germany No.1.

"Manuel Neuer is a great player, but there's only room for one goalkeeper on that bench, and that's me," said the 31-year-old. "If he wants to dislodge me, he's going to have to do something extraordinarily bad."