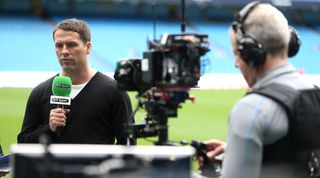 Former Liverpool and England striker Michael Owen has admitted his first season in retirement has been dogged by an overwhelming sense of wellbeing and durability.

One of the brightest striking stars of his generation, Owen will be best remembered for his sensational individual goal against Argentina in World Cup 1998, his hat-trick against Germany in 2001 and his spellbinding performance in the Persil advert campaign of 2004.

Sadly, throughout the second half of his career, the diminutive marksman was regularly sidelined with a range of injuries, ailments, maladies and misfortunes.

These included, but were not limited to a broken metatarsal, torn knee ligaments, a torn adductor, plague, a cracked ankle bone and a migraine brought about while recklessly attempting a quadratic equation on the Real Madrid bench.

Indeed, Owen struggled for fitness so severely that he was declared technically dead by doctors performing a medical in 2005, but Newcastle United still opted to sign him.

The final straw for Owen came during an injury-ridden spell with Stoke City, where he famously strained his thigh before pulling a tongue muscle in the press conference held to discuss his injury.

However, having finally decided to hang up his boots, Owen has become increasingly fit and healthy, much to his frustration.

“I had in mind to really put my feet up, wince slightly at my various ailments and watch some horse racing, do some lethargic, superfluous punditry and generally fritter away the 50 or so years before my death, but that plan has been ruined,” Owen told FourFourTwo.

“At the moment I can’t buy an injury niggle or a lengthy lay-off. I’d love a twist, a sprain or even a hyperextension just for old times’ sake. In fact, I might go do some sprints now.”

Since the publication of this article, FFT has been informed that Owen faces a spell on the sidelines after injuring himself chewing on a cheese football.