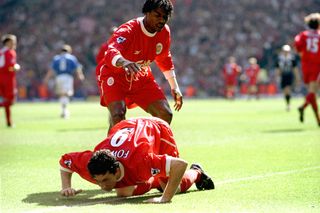 Robbie Fowler was famous for scoring goals, but became infamous for a certain goal celebration during a Merseyside derby in 1999.

During his playing days, the former Liverpool forward was the subject of some unconfirmed accusations from Toffees supporters that he was a cocaine user.

So when Fowler equalised for the Reds in the 3-2 derby win a little over 20 years ago, the England international knelt on the ground and pretended to snort the goal line - right in front of the Everton supporters.

The celebration earned Fowler a hefty four-match ban and a £32,000 fine - the largest fine given to a Premier League player at the time.

Asked whether he regrets performing that act in 1999, Fowler told the June edition of FourFourTwo, which you can order here: “No chance! I used to get absolutely mullered by Everton fans, so I was always going to do it.

“I knew what I was doing. I didn’t care. It was a chance to wind them up after all the abuse they’d given me!”

Fowler was an Anfield hit during his first spell at the club between 1993 and 2002, scoring 171 goals in 330 appearances in all competitions before leaving to join Leeds United.

And after another Premier League spell at Manchester City, Fowler rejoined Liverpool for an 18-month stint where he scored 12 goals in just under 40 games during his second spell.

When asked which period he believed he was at his best, Fowler looked towards the early Liverpool days and the beginning of his goal-laden career.

He said: “It was then – at the start, in the first three or four years. I possibly never got any better than that.

“When I retired I was third in the all-time Premier League goalscorers list, but I’m down to seventh these days. I should be higher and should have scored more goals, but everyone forgets the injuries I had – they take their toll.”

And when FFT asked Fowler if he feels he reached his potential, he replied: “I’m not sure. Maybe. I tried. I always wanted to be better, so was never satisfied.

Read the full interview with Robbie Fowler in the June 2020 issue of FourFourTwo magazine, available in shops and online from Wednesday April 29. Our new magazine looks at the 100 greatest managers in the history of football, exploring the tacticians and tinkermen who have influenced the game more than anyone else, investigates the fall of Barcelona's famed La Masia academy, presents eight pages of quiz questions and football posers to keep you busy during lockdown and discovers the trophy you've never heard of, that Liverpool are proud owners of. We also chat to Bobby Zamora, Shaun Wright-Phillips, Kemar Roofe, Jorginho and more.