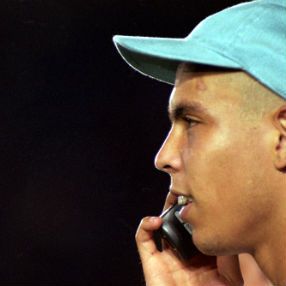 Every 10 years or so, nature’s department for the creation of association footballers presents the world with a player who fires the imagination like none before. A player whose mere presence on the pitch is sufficient to move 100,000 supporters to the edge of their seats. A player whose grace and skill thrill eye and mind in equal proportion. A player who expands the parameters of footballing possibility. An alchemist. A sorcerer. A genius.

First there was Pele. Then Best. Then Cruyff. Then Maradona. Now there is Ronaldo. He’s just 20, so the Brazilian’s induction into the hall of fame might seem a tad premature, but Ronaldo has always been a man in a hurry. In his first season as a professional, with Social Ramos of Rio, he scored eight goals in 12 games. He was 15. A year later he maintained a similar strike rate at his second club, Sao Cristovao (36 goals in 54 starts). Most strikers would have been happy with that ratio at the peak of their careers but Ronaldo was just getting his eye in.

After a £350,000 transfer to Cruzeiro he hit 58 goals in 60 games, earning himself a Brazilian record $6 million transfer to PSV Eindhoven and two seasons in Holland yielded a further 55 goals in 56 matches. He’s been slightly less prolific at international level (12 goals in his first 19 games), but already has a World Cup winners' medal (at 17 he is the youngest player since Pele to get his hands on one) and a bronze medal from the Atlanta Olympics.

Ronaldo doesn’t just score goals, he lives and breathes them. But he is not a conventional goalscorer; not a one-touch, six-yard-box finisher in the mould of Gary Linker or Gerd Muller. Ronaldo’s goals are rarely the product of a team-mates' donkey work. When it comes to putting the ball in the net, the Barcelona striker is very much of the 'if you want something doing, do it yourself' philosophy. He gets the ball, he spins, he accelerates, he drops a couple of shoulders, he shoots... and almost inevitably he scores. And for doing what comes so outrageously naturally he is paid a reported $2 million per season. If you hadn’t worked it out already, Ronaldo has got it made.

He’s also got plenty to say for himself. Money, women, fortune and family. God’s gift to goals told all to FourFourTwo.

You’ve been voted the best player in world, you’re rich beyond your wildest dreams, you have a girlfriend most men would die for... and you're only 20. What on earth are you going to do for an encore?
I’ve worked hard to get where I am, but now that I’ve got this far I don’t want to be remembered as just another player. I want to go down in the history of world football. I want to mark an era, to be a different player, to score special goals. Just to be a good player is not enough for me.

Scoring goals is a skill most players fail to master and yet you make it look so easy. Is it an ability you’ve had to develop or one you were born with?
I realised when I was a boy that I had talent. When I played football with other kids in the street or on some pitch, I was always the best player and scored the most goals. I believe I was born with that talent.

But a lot of boys have talent and don’t make it...
Talent isn’t everything. Perhaps in the past it was enough because football was slower, less technical and less aggressive. But talent alone isn’t enough in modern football. You also need to have strength and work hard.

Some would say you also need a little bit of luck. What do you consider to have been the biggest break in your career to date?
Joining Cruzeiro was a big moment. It was a big club in Brazil and I felt that it was an open door for me. After that everything happened very quickly. I reached the national team, then I went to Holland and then Barcelona came in for me. I was also lucky to have the support of people who helped me a lot.

You made the squad for USA 94 but were not chosen by Carlos Parreira for the final. That must have been a bit of a blow...
No, far from it. My presence at the World Cup was a defining moment in my career, fundamentally because I had the chance to mix with and learn from the best players in the world. I am reaping the rewards of that experience today. Just to be alongside players like Bebeto and Romario was very, very important.

As Brazil's greatest player you are a hero to millions of children around the world. Who was your childhood hero?
Zico. He was the best and played for Flamengo – my favourite team. So much about him inspired me. When I used to play with my friends in the street I always used the name Zico. As a kid I used to hang around the stadiums collecting autographs. Zico’s was the one I treasured most. I still have it. Although I play in a more forward position I tried to imitate him, to copy his style, but it wasn’t possible. There was only one Zico. Now I have found my own way of playing, one that suits me.

Last year FIFA named you their World Footballer of the Year; do you consider yourself the best player in the world?
No! I have got what it takes to get there but I still have a lot to learn. Parts of my game are still weak. My heading has to improve. I jump well but I don’t win the ball as much as I’d like. I try to assess myself and I know what my weaknesses are.

I see myself as a great player but also a young man who is still developing. To be the best player in the world you have to be a complete player. One day I think I will be that player but at this moment I am not.

You come from a poor background but you’re now a millionaire several times over. What effect has the money had on your life?
I grew up without money. There was little, just enough to live on, but it didn’t stop me being happy. Like all young Brazilians I dreamed of the possibility of working outside my country where I could make more money and enjoy a higher status. Obviously my situation is now very different. With what I earn I can enjoy many things that others can't. Money has its worth, but I am not a materialist.

Is it true that you have bought houses for your mother, father and sister back in Brazil?
Yes. As a child they helped and encouraged me. I come from a humble family but I had a happy childhood doing what I enjoyed most: playing football. Now football has given me the opportunity to provide for them – a chance to repay them for what they did. For me family is more important than anything.

Given the conditions in which many children are brought up in South America, do you ever feel guilty about the money you earn?
Children mean a lot to me and I’m really happy when I’m able to help them. Sadly, there are many who have few opportunities in life – not so much in Europe, but in Brazil there are far too many. Those children deserve a better future. If by making donations or personal appearances I can provide them with that, then I consider that a privilege. I saw poverty at close quarters when I was growing up and I know the pain it causes.

How is your relationship with the press?
Where possible, I try to fulfil my obligations with the media. I give as much time as I can at press conferences and try to make myself available for autograph hunters too. Away from football, though, I like to be left alone. At times the press can make things uncomfortable. I need my privacy and I’ve made it clear to them that I don’t want them following me around. Most of them don’t listen, though. They’re always on my tail. A lot of the time I’m not even left in peace when I want to rest.

Of course I can still go out... I just have to be prepared for the consequences. If I g�o to the mall or the cinema I try to go when it's quiet. When I eat at a restaurant I make sure it's private. I have found myself in some pretty complicated situations but it doesn’t bother me. I always stay cool, and try and leave as quickly and calmly as possible.

Does the pressure get to you?
I try not to let it affect me. I always wanted to be the best so I suppose this is the price of fame. But it won’t last forever. A football career is short, so when I reach 30 or 32 I can retire and enjoy a normal life. Until then I just have to accept it. I have lived alone since the age of 15 and I’ve learned to overcome many adversities. This is just another...

At Barcelona there are many big-name players. Are any of them envious of the attention you receive?
No, we are a team. My best friend at Barça is Giovanni. He is a fellow Brazilian so we have a lot in common. I also have an excellent relationship with the Portuguese players: Victor Baia, Fernando Couto and Luis Figo. Most of the time we’re together, they fool around – I love having a laugh. They’re great company; always In good humour. Their outlook is quite Brazilian.

You once said that you 'only make short contracts in love and long ones in football' but you now have a steady girlfriend...
Things have changed. That saying doesn’t have meaning for me any more. I have found a person with whom I would like to build a family. I can now say that in love, as well as football, I want to make a longer contract. I am in love and it is a great feeling.

It’s reported that off the field you spend most of your time asleep. Just how much shut-eye are we talking here?
It’s not true that I’m always asleep. My sleeping times are quite normal – apart from on aeroplanes. I always sleep when I’m flying, even if it’s only a half-hour flight. When I travel back to Rio I usually sleep for the whole 11 hours.

Your physique and goalscoring record have prompted many to call you 'the new Pele'. Is this a compliment or a burden?
It is a great compliment. Being compared to one of the greatest players of all time is a sign that I work hard and with quality, but people tend to become obsessed with comparisons. Pele and I are very different. I am Ronaldo, I have my own characteristics and I wish to be judged on them alone.