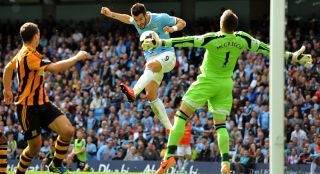 Once again this weekend, Stats Zone - our multiple-award-winning app, fired by data from Opta - was firing on all cylinders in its new online version to help produce a number of eye-opening findings in the Premier League. Here's a selection from each of today's matches... then it's over to you to find some more.

The lunchtime kick-off at the Etihad Stadium was expected to witness another landslide of goals following the Blues' dismantling of Newcastle in their previous home outing. But after their shock defeat at Cardiff last weekend, Manuel Pellegrini's men were shaky from the start and fortunate not to go behind early on when Sone Aluko scuffed wide when one-on-one with Joe Hart.

Sixty five minutes had passed before half-time substitute Alvaro Negredo scored for the second game running, nodding in Pablo Zabaleta's exquisite cross. Yaya Toure's second direct free-kick in as many home games sealed the points late on and made the result appear perhaps more straightforward than it really was.

In the second half, Steve Bruce's men actually completed more passes in the attacking third than their illustrious hosts, but they could not turn the territory into efforts on goal, unlike their more ruthful opponents.

The Bluebirds may not have been able to follow up last weekend's surprise win over Manchester City with another home success over the Toffees, but the defensive fortitude displayed in the 0-0 draw pleased manager Malky Mackay: "We defend from the front and our boys worked hard as a unit."

In a game of few clear chances, the home side managed just one attempt on target during the 90 minutes, with Kim Bo-Kyung standing out with 7 successful take-ons from a possible 8.

They managed to keep their opponents at arm's length thanks to Chilean defensive midfielder Gary Medel's 8 ball recoveries, although he was arguably fortunate not to give away a penalty for a tackle on Leighton Baines.

Speaking of Baines, the attitude of the left-back and team-mate Marouane Fellaini could once again not be faulted amid continued talk of them joining Manchester United and former Toffees boss David Moyes. Both completed 60 of their 66 passes, figures only bettered by defender Phil Jagielka.

After their comic failure to register a shot on target against West Ham a week ago, Newcastle huffed, puffed and finally blew Fulham's house down after peppering their goal with 25 attempts.

Notoriously bad travellers Fulham managed just 3 shots on Tim Krul's goal, although the men in front of him worked hard to keep the Cottagers at bay with a 100% success rate on clearances.

A frustrating day for Saints fans, as their side enjoyed more of the ball at Carrow Road but evidently had travelled without their shooting boots.

Mauricio Pochettino's men saw just two of their 11 attempts on goal force a save out of John Ruddy. The Argentine boss felt Southampton should have been awarded a penalty when Adam Lallana's effort hit Bradley Johnson's outstretched arm: "It was blatant. It could've changed the game completely."

It proved a mixed day for the Saints' skipper Lallana. He led the charts for ball recoveries with 8 but completed just the 1 successful take-on in the game as the visitors suffered their opening loss of the season.

An afternoon where sides struggled to find the net generally was summed up by the Hammers, who tried and failed to hit the target on nine occasions. Stoke continued their style evolution with an impressive display, and should have edged ahead much sooner than Jermaine Pennant's free-kick in the 82nd minute.

Much of the Potters' dominance was down to midfielder Steven Nzonzi. The busy former Blackburn man was comfortably the best passer in the game, completing 61 out of 67, and combined grit and guile effectively by also topping the charts for ball recoveries with 12.

The late entertainment came from Selhurst Park and was an evening of firsts, as Danny Gabbidon scored his first Premier League goal in 116 games. Dwight Gayle and Stuart O'Keefe also opened their accounts late on to seal the Eagles' debut win of the campaign and leave the Black Cats still searching for theirs.

After a dismal first 45 minutes, Paolo Di Canio's half-time team talk did the trick. Sundelrand roused themselves to level through the fit again Steven Fletcher, but few could begrudge Palace the points. The Eagles created eight chances in the first half and bettered that tally after the break, leaving boss Ian Holloway dancing.

The home side's midfield duo of Mile Jedinak and Kagisho Dikgacoi bossed the midfield, while goal-scorer Gabbidon was a rock at the back, clearing and heading away everything that came near him.