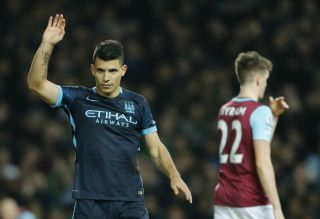 Sergio Aguero: seven shots, three on target, two goals. The Argentine saved City again, despite having only scraps to feed on.

Other than the penalty in the 9th minute, it took the visitors until Aguero’s second on the 81st to register another shot on target.

The overall shot count was level at 3-3 at half-time but improved dramatically in the second half, West Ham notching 10 shots to City’s 16. Of those 16, three were on target (all from Aguero), 10 were blocked and two hit the post.

Once again, Dimitri Payet was at the heart of West Ham’s vibrant attacking display.

Though not on the scoresheet this week, the Frenchman’s flicks, tricks and vision exposed Manchester City. He got the Hammers faithful on their feet time and again as he completed seven successful take-ons and forced a brilliant save from Joe Hart in the first half as he looked to add another spectacular free-kick strike to his collection.

An honorary mention too to his partner in crime on the left, Aaron Cresswell - a willing runner all evening, providing an option on the overlap.

Valencia at the double

Payet may be stealing the headlines in the West Ham side, but two standout individual performances from Enner Valencia and Alex Song were also vital to such an impressive overall performance by the home side.

Valencia’s finishing was clinical: two shots, two goals for the Ecuadorian, doubling his season tally in the league.

Song, rightly named Man of the Match, marshalled the midfield well and, alongside Mark Noble, worked tirelessly to ensure City could not counter-attack at will, recovering the ball 14 times and winning eight out of the 13 tackles he attempted. The former Arsenal man also used the ball well, completing 85% of his passes, 10/10 when mopping up in the defensive third.

Kelechi Iheanacho has already proven his worth as a super substitute for City in the league this season, scoring a late winner at Crystal Palace in September.

The 19-year-old was impressive again coming on as a 76th minute substitute for Fabian Delph.

He attempted two shots, one off target and one blocked but his foray into the area lead to Aguero’s equaliser and his directness in the attacking third was something that had been lacking from City’s play up until his introduction.

Analyse West Ham vs Man City yourself with Stats Zone