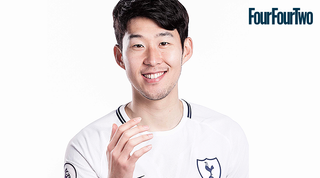 The South Korea international has become a key component of the Lilywhites’ side since his 2015 arrival from Bayer Leverkusen, scoring 22 Premier League goals since the beginning of last season.

Son has become famous for using an array of elaborate handshakes with his team-mates, conjuring up a different routine for each member of the Tottenham squad.

The 25-year-old tells FFT they are a “special” means of communication between people he not only regards as colleagues, but friends – although he insists it was a different Spurs player who kicked off this craze in the first place…

Speaking exclusively in the March 2018 issue of FourFourTwo, he says: “People think I brought it to Tottenham, but I think it was Dele Alli who actually started it. For me, the handshakes are a special thing. I don’t see all of these guys as just my team-mates – I see them as friends and I want to show that. That’s why I’ve got a different one for every player. I think everybody enjoys it."

Not everyone at Hotspur Way has their own specially tailored embrace, however: the South Korean admits he’s yet to try out a ‘bro shake’ with his Argentine manager, in case it backfires.

READ THIS NEXT Son: "In your dreams you can do anything – I dream of winning the Ballon d'Or"

Read the full interview with Heung-min Son in the March 2018 issue of FourFourTwo magazine, which features exclusive chats with Liverpool's new King of the Kop Mo Salah, Manchester City goalkeeper Ederson and Real Madrid schemer Luka Modric. Plus, we preview all eight Champions League last 16 ties and experience Man v Fat football, where losing weight is the secret to winning matches. We also spend a week with former Leicester manager Nigel Pearson in Belgium, learn first-hand how Gennaro Gattuso made a career from harnessing his inner rage, go One-on-One with ex-England boss Steve McClaren and hear from Michael Laudrup about life in Qatar. Order a copy now, and then subscribe!