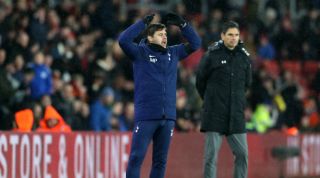 The English football season is a slog and this, a bitterly cold day in a sodden Southampton, was a reminder of that. The modern player may not have to contend with scarred pitches and ankle-deep mud any more, but this was still less than ideal.

It probably blunted Tottenham more. Mauricio Pochettino has built a side laced with speed and flair and this was an afternoon which dulled their finesse. Southampton, by contrast, were happy to take whatever levellers nature made available. Mauricio Pellegrino's employment status remains highly tenuous and the St Mary's crowd has grown increasingly hostile towards his defensive pragmatism and, ultimately, a league position which has progressively worsened.

A couple of hours before kick-off, Marco Silva was relieved of his duties at Watford. If Pellegrino isn't already taking sly glances at Les Reed's call history, he certainly will be now.

Southampton have now lost nine points from leading positions at St Mary’s this season; more than any other Premier League side on home soil.

Spurs have been on a fine run lately, unbeaten since that chastening defeat to Manchester City, and victorious in six of their last eight Premier League games. The form of Son Heung Min has attracted attention, rightly so, but perhaps at the expense of others of greater fundamental importance. Hugo Lloris and Christian Eriksen were both ruled out through illness and, while Michel Vorm's inclusion raised the visiting pulse, the latter's absence was theoretically more damaging.

Players like Son - and to a lesser extent Harry Kane and Dele Alli - are the most visible part of the Tottenham mechanism, but Eriksen is the grease in the gears. That was ultimately shown here, with Spurs grinding and clunking to a dispiriting draw.

The irony of Southampton's form is that it nosedived after what was supposed to be a tipping point. The victory over Everton in late November may have owed much to a feeble opposition, but - maybe for the only time under Pellegrino's watch - the team looked free from inhibition, attacking with verve and life. Alas, it was a false dawn and they haven't won a league game since. Abdoulaye Doucoure's laughable equaliser at Watford aside, they haven't really looked like do so, either.

Fortunately, Tottenham were charitable early on. Inside fifteen minutes, Ryan Bertrand ran onto a pass which left Serge Aurier adrift and his cut-back was diverted into his own net by Davinson Sanchez. Unlucky, perhaps, but also entirely avoidable.

Pellegrino was brought to England on the back of his work at Alaves, where he built an obstinate team celebrated for its rigidity. Unfortunately that's not a quality which he has so far been able to transplant into his new side. 90 seconds after taking the lead, Southampton surrendered it in the meakest terms: a Ben Davies corner was allowed to drop into the six yard box, a cluster of defenders invited Kane to do his worst and, inevitably, he did. Squandered momentum rushed out of the stadium and out over the channel.

The frustration was palpable and understandably so. This was a Tottenham team out of tune, slowed by a sticky pitch and weakened by their absentees. Behind, understrength and lacking any sort of rhythm, they were given a hand out of the hole they'd dug for themselves.

They would never completely seize this game, though. Their absentees and the conditions explained that to a certain extent, but it would be disengenious to ignore their failings. There are times - and this was one of them - when Tottenham evidently believe that their class and reputation will suffice. Southampton are and remain a struggling team, but their weaknesses had to be properly examined and their inferiority conclusively proven. Neither were.

Instead, counter-attacks meandered up the field, always stymied by some over-indulgence or miscalculation, and the hope was evidently that Southampton would somehow just beat themselves. Assuming that there will always be another chance, another opening, and another moment in which a game can be won is not a healthy trait and it's one which was certainly costly here.

There are no sweeping judgements to be made from a single game, of course, and Spurs remain a very capable side, but the air within the top-six is thin and any team unable to sustain their ruthlessness will find themselves sliding backwards in a hurry. And maybe that's what this game was: not a fixture which will last long in anyone's memory, but a sharp reminder of what happens if certain standards aren't met.

It was cold, it was wet and it was entirely forgettable, but it should still serve as vivid reference point between now and May.