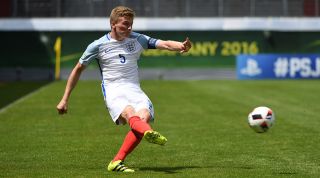 Everything began to unravel so quickly. It was tough to accept, more difficult still to understand. The sleeping giant of French football had pinned its hopes on a rapidly rising English teenager, a sure-fire future captain, only for an innocuous mix-up to trigger a downward spiral that proved difficult to arrest.

“For six months, I got sent down to the reserves,” Taylor Moore, now of Bristol City, tells FourFourTwo, recalling how a bizarre fallout with manager Antoine Kombouaré halted his prodigious rise at Lens four years ago. “I didn’t go back to train with the first team at all, who were struggling at the time. It was all a big misunderstanding and it cost me six months of football.”

How it came to that made little sense. After making his Ligue 1 debut as a 17-year-old in the final weeks of the 2014/15 season, relegated Lens were ready to make Moore a central figure in their efforts to bounce back up to the French top flight. Interest in the young defender – from Tottenham, West Ham, Southampton and Crystal Palace – was batted away, and a sizeable bid from Lyon was rejected.

But he played just five more game for them.

When a dip in form led to him losing his first-team place, it was suggested by a member of the coaching staff that Moore turn out for the reserves to regain his sharpness. Little did he know, however, that his honest efforts to work his way back into the team would cost him.

“I presumed the first-team manager already knew and it was sorted,” Moore says. “I got called in the next day by the manager, saying, ‘I didn’t know you played.’ He completely went off. I was sitting there thinking, ‘Wow. What have I done?’ I was trying to explain – ‘The academy manager said he’d run it by you. I wouldn’t do that, of course not.’ He said, ‘That’s not my problem.’

“I completely disappeared from the first team for six months, and it was the toughest time. Towards the end of that season I broke down, mentally and physically. It was my first setback and I didn’t know how to deal with it.”

Moore was born in London but moved with his family to France aged seven. Having already represented West Ham before leaving England, he joined local French side Itaples, before signing for Lens – a 70-mile eastward drive from the family home in Le Touquet – when he was 12.

Moore was scouted as a striker but reimagined as a central midfielder within the academy at Lens, before transitioning to defence at 16.

Moore’s presence on the other side of the Channel meant he wasn’t on the radar of England scouts until he was 16, but he soon established himself with the Young Lions. He helped them win the European Under-17 Championship in 2014 alongside Joe Gomez, Tammy Abraham and Dominic Solanke, and later captained the under-19s.

Just short of a year after winning the Euros, Moore was handed a senior debut for Lens against bitter rivals Lille in a local derby.

“I remember being at the hotel with the team, thinking, ‘I’ll be in the squad. I’ll be on the bench for the derby tomorrow’,” Moore recalls. “I’d never even been in the squad before.

“In the morning, I remember getting a phone call from the manager saying, ‘Can you come down to breakfast a bit earlier than everyone else? I just want to have a quick chat with you.’ So he’s pulled me in and gone, ‘Right, I’m going to start you today against Lille.’ I thought, ‘Wow!’ My eyes probably popped out of my head at the time. I was so, so happy.

“I was a bit nervous. He told me it was going to be at right-back. To make your debut for the club you love and the club you grew up with against Lille, the derby – it’s one of the biggest derbies in France.”

Lens were beaten 3-1 in front of just under 40,000 at the Stade Bollaert-Delelis, but Moore – who assisted his side’s only goal – impressed enough to keep his place for the final three games of the season.

An accounting irregularity meant Lens’ 2013/14 promotion to Ligue 1 was ruled invalid, however, and they were to be relegated regardless of their league position at the end of the 2014/15 campaign. They finished rock bottom anyway.

With Moore an outcast and Lens struggling in the second tier, Kombouaré was replaced by Alain Casanova at the end of the next season. But there was to be no clean slate for him. In a meeting with the new manager, the banished Englishman was told he was no longer wanted at Lens.

“I remember sitting there being absolutely distraught,” Moore says. “I was not expecting that whatsoever. I was expecting to maybe have a month, or a week, to show what I’m about. He wasn’t ready [to listen]. I said to him, ‘I don’t want to leave. I want to be captain of Lens.’ He laughed at me. He said, ‘You can’t be saying stuff like that when the club want you out the door.’ Within 24 hours of that meeting, I was in Bristol.”

Forgotten in France, Moore was still a well-regarded prospect back in England. Tottenham, West Ham and Crystal Palace all made approaches for the centre-back, who was still only 19. But Bristol City’s offer, with the promise of first-team football opposed to further development at under-23 level, proved most attractive.

A €2m deal was quickly concluded and Moore relished the chance to rebuild. But the dejection of his denouement in France lingered. “It was a fresh start, but there wouldn’t be one day where the name Alain Casanova didn’t run through my head, or Lens,” Moore admits. “I was heartbroken.”

Moore played seven times by New Year in a steady integration at Ashton Gate. But the Robins were struggling. On December 30, an 87th-minute volley from Ipswich striker Brett Pitman condemned City to an eighth defeat in nine games, and Moore – who was marking Pitman – was blamed for the late concession. Within a week he was loaned to League One’s Bury for the remainder of the season. By the end of the campaign, he’d lost his England place and had to watch from afar as his international colleagues won the Under-20 World Cup.

“I’d been down, was on the way back up... then bang,” Moore says. “That loan at Bury was rock bottom. I played every week, but I ended up playing right-wing-back in a team that was struggling.

“I was all over the place mentally. Playing every week was great, but my mental approach to football was terrible. I wasn’t enjoying it. At the end of that season, I called my agent and said, ‘Have you got someone you know who’s a sports psychologist? Because I definitely need to get a grip here and change my approach towards football.’”

Moore was referred to Jamie Edwards, a peak performance coach who has worked with Gareth Bale and Luke Shaw. He spent the next season on loan with Cheltenham in League Two, and although life with a struggling fourth-tier side often proved as trying as his Bury doldrums, his work with Edwards helped him develop the resilience and mindset to extract the positives from his experience. “As difficult as it got, I loved every moment,” he says.

When Bristol City signed Tomas Kalas at the start of last season, it was clear that Moore would again struggle for game time with his parent club. Another loan beckoned, only this time it would be different. Joining Southend brought the comfort of being closer to London than he’d been since he was seven years old, and in Chris Powell he would be working under a manager he knew from the England set-up.

“I just felt very happy and very settled straight away, and I had my best season yet in professional football,” Moore says of his year in Essex. “It was the first time I’d felt important in a team. For me, at the age of 21, it was definitely what I needed. This whole season made me fall back in love with football. I loved every second of it.”

Moore has returned to Bristol City ahead of the new season profoundly changed since his last appearance for the club two-and-a-half years ago, and determined to prove himself. “It’s my time to go and impress [the manager],” he says. “To show him that I am trustworthy enough to play at this level in the Championship.”

There’s lost time to make up for, and latent potential to deliver on. At 22, Moore is finally ready to move forward, unburdened by the past and prepared for whatever lies ahead.

“That’s the plan for pre-season: try to do my best, and see where that takes me.”

QUIZ! Can you name the 50 most expensive Brazilian player transfers ever?

RANKED! The 101 greatest football players of the last 25 years