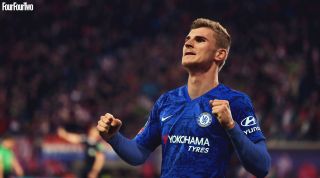 Tammy Abraham has performed excellently in his first full campaign at his boyhood club, but he remains a raw talent, while Olivier Giroud and Michy Batshuayi haven't convinced in the Englishman’s absences this season.

Werner is 18 months older than Abraham, but far further along in his development, having already played more than 200 games, and scored 88 goals, in Germany's top flight. The tactical flexibility he's developed at RB Leipzig – one of the most progressive clubs in Europe in terms of their set-up – means he is adept at playing a number of forward positions.

With the €40m signing of Hakim Ziyech from Ajax also confirmed, we took a look at where the might play alongside, and instead of, the pre-existing options at Stamford Bridge.

Part of a mobile front two

Werner’s role in this system is two-fold; winning flick ons and second balls around the penalty area - in the way a classic “big man-little man” set-up works - but also dragging defenders up the pitch in tandem with his partner and looking to spring counter attacks. Given that both Poulsen and Schick are fast, as well as physical, the natural choice of striker partner at Chelsea would be Batshuayi of the existing crop. The Belgian has a blend of pace and strength neither Giroud or Abraham possesses.

It’s also worth noting this may be the ideal system to get the best out of fellow new signing Hakim Ziyech. The playmaker would surely enjoy playing creator between this pairing.

Cutting-in from the left

While the vast majority of Werner’s appearances come at centre-forward, he is also often deployed on the left of a three-man attack for both Leipzig and Germany, where he can cut in and shoot on his stronger right foot.

One example of this came in Leipzig’s 3-0 home win against Tottenham in the Champions League earlier this season. The German didn’t score that night, but his pace and movement from the left caused Spurs right-back Serge Aurier countless problems. The defender was constantly forced to leave his position in order to follow Werner inside, opening up space for others. Both Werner and Angelino - Leipzig’s left midfielder and the man who most benefited from Aurier’s ill-discipline - set up goals for Marcel Sabitzer as Leipzig knocked last season's finalists out of the competition.

At Chelsea, Werner and another wide forward could either flank Giroud, who is Chelsea’s best striker when it comes to linking play, or Abraham, who would most benefit from the pockets of space that Werner's movement opens up.

Werner’s searing pace might best be deployed off a classic target man. In a second striker role, he could use his clever movement to drag opposition defenders deep, before spinning in behind and accelerating beyond Giroud, who is the natural fit for this type of set-up.

The Frenchman is comfortably Chelsea’s best striker when playing with his back to goal, and his ability to play short passes around the box - see Jack Wilshere’s famous goal against Norwich City for Arsenal in 2013 - could be the perfect foil to get the best out of Werner’s direct running. A good example of this is France boss Didier Deschamps identifying Giroud as the necessary striker to get the best out of Antoine Griezmann, another intelligent striker with the acceleration to run beyond a target man into space.

Part of a fluid front three

Should Lampard be genuine about his faith in Abraham, Werner may have to adapt his role in order to best fit around the Englishman. A front two of Abraham and Werner could work, but as both rely on pace and movement rather than physical strength and link-up play, it seems unlikely to be a long-term option for Chelsea’s pragmatic coach.

Perhaps, therefore, a fluent front three - akin to Liverpool’s - might be the best option, with Werner, Abraham and another forward player given license to dovetail at will. Chelsea certainly have options, with the likes of Mason Mount, Christian Pulisic and Calum Hudson-Odoi all capable of playing on the wings or dropping into midfield.

This is certainly the most tantalising option for Chelsea fans, but would rely on a workmanlike midfield – again, a la Liverpool’s – which Lampard doesn’t necessarily have beyond N'Golo Kante.

It’s possible therefore, that Werner might simply be made the focal point of Chelsea’s attack, at the expense of Abraham. The season is long, with Chelsea likely to be competing in four competitions again, and Lampard might simply choose to use the Englishman as an option from the bench.

While it is true Werner tends to perform better when playing alongside another striker - Joachim Low’s experimentation with Werner as a lone centre-forward for Germany never convinced - there’s no reason to think he isn’t up to the task in the Premier League, where Chelsea will have more opportunities to counter than Werner has at international level.

A 4-2-3-1 system would allow for three dedicated attacking midfielders in their correct positions – Pulisic, Ziyech and Mount, for example – and leave a host of specialized options from the bench. Greater balance could be found in the midfield, too.

This system might be ideal for Chelsea in games in which they feel they may dominate, with Ziyech and wide midfielders waiting for the perfect moment to pick a tight defence. Werner certainly has the finishing ability to make those chances count.