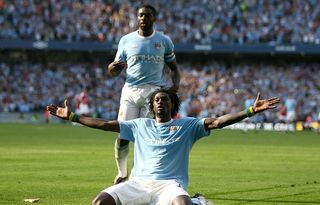 Football fans have to accept players moving on whether they like it or not – unless you're Real Madrid or Barcelona, it's impossible to impede ambition when top stars want a move badly enough.

This summer it's (for various reasons) Neymar, Antoine Griezmann and Laurent Koscielny getting uppity about their short-term futures.

While some don't offer much scope for reflection when they make their exits, others leave a rose-tinted hue of nostalgia – very much unlike the list of players below. Break-ups are sometimes very painful indeed...

Adebayor was, for the most part, a reliable goalscorer at Arsenal and netted 30 times in 2007/08. The following season, however, he was beset by injury problems and clashed with boss Arsene Wenger - who sold him to Manchester City for £25m.

As the Togolese declared in a 2018 interview: "I had a meeting with Arsene Wenger in his office when he told me I had to leave because he didn't see my future at Arsenal. The next day when I joined Manchester City, I saw him doing a press conference in London saying that I wanted to leave because the money was big. Since that day is where the hate for Arsenal came from."

As a result, Adebayor lost it when he faced the Gunners for the first time - infamously running the length of the field to celebrate in front of his old fans and kicking former team-mate Robin van Persie in the face.

"What was going through my head? A prisoner is out. A prisoner is free," said the striker, now of Turkish side Istanbul Basaksehir. Good to see he’s moved on.

Premier League defenders breathed a collective sigh of relief when it emerged that former Chelsea boss Antonio Conte had told the Blues striker he was no longer in his plans - by text message.

Despite scoring 22 goals in all competitions and leading Chelsea to a second title in three seasons, the volatile hitman’s season was disrupted by speculation of a move to China and clashes with coaching staff.

With the hard-nosed Conte not backing down and signing Alvaro Morata from Real Madrid as a replacement, Costa considered legal action against the club. He was eventually allowed to return to Atletico – who he left for Chelsea for £32m in 2014 – but couldn’t play for three months due to a transfer ban in Madrid.

"I was wrong going to Chelsea, because of their way of dealing with things," Costa later huffed.

Spurs fans are still bitter about Campbell committing the ultimate sin of moving to north London rivals Arsenal in 2001.

The 44-year-old, who now manages League Two side Macclesfield, was a product of Spurs’ youth system and played over 300 times for the club in nine years at White Hart Lane.

Campbell supposedly suggested he would never cross the north London divide during his time at Tottenham – something which he denied to FourFourTwo – but joined the Gunners on a free transfer after his contract expired and claimed the move would boost his international prospects.

The former England defender endured persistent cries of “Judas” (and far worse) from the Spurs faithful, but had the last laugh: Campbell wound up winning four trophies at Arsenal, including the Premier League twice.

Striker Van Hooijdonk refused to play for Nottingham Forest after the club supposedly priced him out of a move back to Holland.

The outspoken Dutchman arrived at the City Ground from Celtic in 1997 and helped them back into the Premier League after relegation - but didn’t bother turning up for a few months after comparing then-boss Dave Bassett’s £10m valuation “like trying to sell a cappuccino for £25” in an interview with FourFourTwo.

Eventually, Van Hooijdonk came back after missing 11 games, Bassett was sacked and Forest were relegated again. A swift exit to Vitesse followed.

BIG INTERVIEW Pierre van Hooijdonk – "I should have waited before going on strike at Forest... but Dave Bassett was a snake"

Sunderland’s barely-believable slide into the third tier of English football meant a number of players were queuing up at the exit.

Gabon midfielder Ndong and Senegal centre-back Djilobodji decided to skip the queue, however, and simply failed to report for pre-season as instructed by the Black Cats.

Djilobodji briefly came back over a month late (then "comprehensively failed" fitness tests), Ndong didn’t, and both were sacked for breach of contract. Everyone loves a happy ending.

In one of the most controversial transfers in football history, Portuguese wizard Figo joined Barcelona's eternal rivals Real Madrid at the turn of the millennium for a then-world record fee of £37m.

Figo kicked off the Galactico era at the Bernabeu, paving the way for Zinedine Zidane and Ronaldo to follow over the next two seasons. Madrid triggered his release clause, leading to a bitter war of words between the two sides’ boards.

His returns to the Camp Nou were eventful to say the least - not-so-welcoming banners were displayed in the crowd and objects thrown when Figo took corners, including that severed pig’s head. Brutal.

BIG INTERVIEW Luis Figo – "Barça weren't treating me properly. It was too late when they did, so I joined Real Madrid"

Perhaps the greatest left-back of the Premier League era, Cole was involved in one of the top flight's messiest transfer sagas when Jose Mourinho and Chelsea tried to lure him to Chelsea in 2005.

The Blues were fined for tapping up Cole, who infamously claimed that he “almost crashed his car” in shock after ‘only’ being offered £55,000 per week in a new contract by the Gunners.

Mourinho eventually got his man a year later - in a player-plus-cash deal involving William Gallas - and the newly monikered ‘Cashley’ went on to win eight major trophies at Stamford Bridge.

Frenchman Gallas’s move to Arsenal which sent Cole the other way was another protracted and bitter deal.

The Blues issued a damning statement which claimed the defender, who spent five years with Chelsea, had refused to play for them following a contract dispute and threatened to score own goals  - claims he shot down in an interview with FourFourTwo.

After more contract issues with the Gunners, Gallas - not one to care what people thought of him - joined north London rivals Tottenham.

“F*ck off, we’re going to Man United,” Berbatov told FFT in an interview last year, after his agent told him of interest from Manchester City.

Only the move - one the Bulgarian called “going to the top of the mountain” - was a messy one, and led to Spurs reporting United to the Premier League for tapping up after Sir Alex Ferguson supposedly spoke publicly about a potential deal (something which he denied ever doing).

Chairman Daniel Levy eventually gave in after Berbatov became unsettled, and a £30m deal was concluded on deadline day - but claimed the striker showed a lack of respect by engineering a move to Old Trafford.

Dogged Argentine striker Tevez arrived on English shores in a murky deal from Corinthians in 2006 - and joined Manchester United from West Ham a year later.

But after he'd scored 34 goals in two seasons at Old Trafford, Tevez failed to respond when contacted about signing a permanent deal according to boss Alex Ferguson - something the striker denied.

Frustrated at a supposed lack of communication from the club and his playing time, Tevez crossed the Manchester divide to sign for rivals City and became the face of that infamous ‘Welcome to Manchester’ billboard.

Payet lit up the Premier League during his time in England - but his return to Marseille after two years in east London left Hammers fans with a bitter taste.

Despite the Frenchman signing a new five-year contract and picking up numerous awards just a year earlier, his manager Slaven Bilic claimed that the playmaker was refusing to turn out for his side any longer - leading to a swift return to the south of France.

Payet stated that he was “bored” at the London Stadium and claimed he risked his career by staying there for too long. Tell us how you really feel, Dimi.

Cruyff is best associated with Ajax, but the Dutch genius also enjoyed a memorable stint with their bitter rivals Feyenoord at the end of his career.

By 1983 he was in his second stint with the former - this one a lot more low-key than that mesmerising initial nine-year spell which cemented his place among the world's all-time greats – and yet still won a league and cup double.

To his disbelief, however, he wasn't offered a new contract. Retaliating in the best way he knew how to, Cruyff simply upped sticks to Feyenoord – where he won another domestic double in his final season before retirement. Pure class.

QUIZ! Can you name Arsenal's last 50 players in the Premier League?