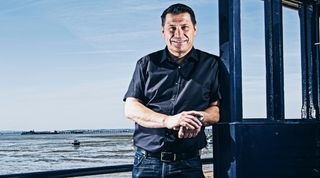 Tony Cottee has revealed that he came close to signing for Arsenal in 1988, in a move that would likely have seen the Gunners cool interest in then-Crystal Palace forward Ian Wright – their future record goalscorer and Highbury legend.

Speaking exclusively in the new issue of FourFourTwo magazine, out Friday, Cottee explains that the prospect of having to track back led him to pick the north-west and Everton over north London.

He claims that he has no regrets about the move – or lack of – despite Arsenal going on to win the league during his time at the Toffees.

“When I spoke to George Graham, two things stuck in my mind. He said I could wear the Arsenal club blazer. I thought, ‘I’m a West Ham fan, what do I want to do that for?’” Cottee told FFT. “And he talked about tracking full-backs when we lost the ball. That was the last thing I wanted to hear!

“Up at Everton, Colin Harvey just said, 'I want you to get 25 goals'. Everton’s offer was much better financially, too.

“I could have won lots of things at Arsenal, but I also could have broken my leg on the first day of training – you don’t know.”

IN THE MAG Jurgen Klopp exclusive: Steven Gerrard should replace me as Liverpool manager

Cottee, who played 184 league games for Everton over a six-year period, also points out that the move probably worked out for Arsenal fans too.

“Quite a few Arsenal fans have said, ‘Don’t you wish you’d signed for us?’ I say, ‘But if I’d signed for Arsenal, Ian Wright wouldn’t have, so you should be pretty grateful to me!’

Read the full interview with Tony Cottee in the November 2019 issue of FourFourTwo magazine, out in shops and available digitally from Friday (September 27). We also have an exclusive interview with Liverpool boss Jurgen Klopp, head to Buenos Aires for another madcap Boca-River Superclasico, shine a light on the murky world of money laundering, catch up with forgotten man Adel Taarabt, go inside Wolverhampton Wanderers and much, much more. It’s a belter.

WATCHPremier League live stream best VPN: how to watch every game from anywhere in the world