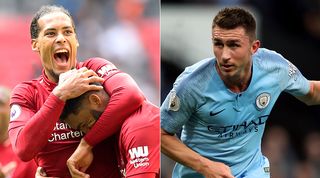 Khaldoon Al-Mubarak channelled his inner John McEnroe, albeit in a more mild-mannered fashion. “You cannot be serious,” said Manchester City’s chairman when told that Southampton had placed a £75m price tag on Virgil van Dijk’s head.

The Saints were serious. So were Liverpool, who duly paid the fee. Manchester City had also been suitors but after their powerbrokers were put off, in an exchange that was captured in the Amazon documentary All Or Nothing, they revived their interest in Aymeric Laporte.

Sunday’s showdown against Anfield is many things: a top-of-the-table encounter, a rematch of a remarkable Champions League tie, the latest episode in the ongoing battle between Pep Guardiola and Jurgen Klopp where, unusually, the Catalan has a losing record.

But it is also a chance to compare the two most expensive centre-backs in history. Laporte’s £57m fee put him second only to Van Dijk and therefore makes him City's costliest ever defender; their combined fees amount to £132m. If John Stones is the Frenchman’s sidekick and the Dutchman is paired with Dejan Lovren (which is admittedly unlikely, given Joe Gomez’s terrific form this season), the four centre-backs will be the £200m quartet.

Perhaps City are least entitled to object to the inflationary costs of defenders after they raised the ceiling for full-backs above the £50m mark to bring in Benjamin Mendy and Kyle Walker. In any case, Guardiola defended Liverpool’s lavish outlay in December, arguing that if "he plays at a high, high level for six, seven, eight years, it will be cheap".

An alternative perspective is to wonder not if Van Dijk is worth £75m, but what the £18m differential between the two January additions bought. A possibly glib response is a place in the Champions League final: Van Dijk helped Liverpool weather a City storm in last season’s quarter-final second leg at the Etihad Stadium. He was a colossus while Laporte was miscast as a left-back in the first leg.

Another answer would entail an immediate impact. Guardiola eased Laporte into English football whereas Van Dijk scored a debut derby winner and rapidly assumed a pivotal role. City’s defensive record in the Premier League is actually slightly better with Laporte in the side than Liverpool’s is with Van Dijk – the champions have conceded eight times in 16 top-flight matches and the contenders 13 in 21 – but the Dutchman’s effect is more obviously transformative: at this stage of last season, Liverpool were in the midst of a porous start where their backline was breached 16 times in nine league fixtures.

Van Dijk can seem a poster boy for Liverpool’s new policy of forking out whatever is required to land their top target. The sense is that they paid the most to get the best: it's not a particularly controversial statement to suggest Van Dijk is the division’s outstanding defender. Perhaps because he's less eye-catching, Laporte has attracted fewer superlatives; the second-most expensive is not always described as the second best.

If the naked eye can offer evidence of Van Dijk’s dominance in games, so do the statistics. Compared to Laporte, he averages more tackles, interceptions, blocks and clearances per game in the Premier League this season. He wins more headers. He commits more fouls and is fouled more often. Laporte’s pass completion rate is higher and he completes more passes per game, but that would be expected in a Guardiola side. The counter-argument is that, by dint of going away to Crystal Palace, Leicester, Tottenham and Chelsea, Van Dijk has probably had to defend more.

If reasons for his recruitment can be found in his performances, particularly his talismanic presence in the major matches, others lie in the intangible factors. If the left half of Liverpool’s defence has gone from a weakness to a strength since Van Dijk has been allied with Andrew Robertson, it's hard to put a value on his indirect impact on others.

WATN? Golden Boy winners since 2003 – and what happened to them

To say Robertson rarely looks an £8m buy now is a compliment; to suggest Lovren rarely looked a £20m centre-back before Van Dijk’s arrival was a criticism, but the Croatian took his fine form from his days alongside another former Southampton player into a World Cup that ended with a maligned figure bracketing himself along with the planet’s best in his position. To compare Gomez to Bobby Moore is obviously hyperbolic, but he's looked precociously assured alongside the former Southampton man.

Van Dijk has cajoled improvement from others. It's reminiscent of the way that, when Nemanja Vidic was at his peak, virtually anyone – a category that even included Chris Smalling – seemed accomplished alongside the Serb.

Van Dijk is a catalyst, Laporte a complementary presence, charged with being a mirror image of Stones in a futuristic partnership of likeminded passers. Each is younger than Van Dijk and promises more longevity. But Liverpool’s record buy has been seriously good. Arguably their £75m did not buy them one player but several, his influence stretching left and right across the back four, and into a radically different defensive record.