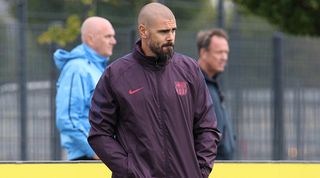 It's been a bit of a week for Victor Valdes.

The former Manchester United and Middlesbrough goalkeeper was named coach of Barcelona’s U19 team, Juvenil A, in July – but only a couple of months in and he’s already been sacked.

It wasn’t a good start for the former Blaugrana goalkeeper, who made 535 appearances for his beloved club from 2002-14 and won 11 major honours. In his first game as coach against Girona, Valdes was sent off for telling a referee to “f*** yourself” – and duly earned a two-game ban for his troubles.

Things went from bad to worse when Valdes clashed with academy director (and former team-mate) Patrick Kluivert on Friday.

According to Marca, Kluivert reproached Valdes for not playing a 4-3-3 formation, with the ex-goalkeeper replying that his preference was to set the team up in a 4-4-2.

The pair also fell out over the treatment of La Masia prospect Ilaix Moriba. Journalist Carles Escolan reported that after Valdes dropped him for a match against Lleida, Moriba and his parents complained to Kluivert, leading to Valdes telling the youngster that he shouldn’t have gone above his head to grumble about playing time.

It doesn’t seem like the breakdown was all from Valdes’s side, though. Escolan says that neither Kluivert nor head of La Masia, Xavier Vilajoana, wanted Valdes to take the job in the first place.

The tension led to Valdes not being allowed to call up under-18 players to fill gaps in his side when under-19 youngsters were promoted to Barcelona's B team.

Valdes was also unhappy that his side were not allowed to play in the Estadi Johan Cruyff, the stadium where Barcelona B and women’s team play. “I thought that was going to be our stadium,” he said. “Unfortunately it’s not like that, but I am still fighting.”

There was a UEFA sanction handed down to Barcelona as a result of Valdes and his team arriving to a UEFA Youth League game against Inter Milan half an hour late.

All told, it seems as if the writing was on the wall early on for Valdes. Having arrived back into a corner, he tried to fight his way out of it and has ultimately paid the price.

Juvenil B coach Franc Artiga, who was a candidate for the role originally before it was given to Valdes, has already been announced as his replacement.

QUIZ Can you name the 52 players to have played every minute of the 2019/20 Premier League season so far?