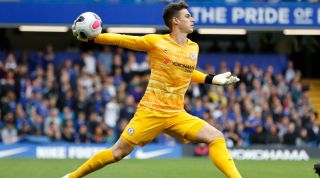 How many of you reading this can honestly say that you’ve worked for 720 minutes since early August? That’s 12 entire hours: over one hour a week.

Of course, none of us ever work that much. Not since Twitter was invented, anyway.

That’s why today we salute the true heroes in our midst. The workers single-handedly pulling up UK productivity. The ones who turn up, put in a shift and never clock off early.

Yes, this is to you, Premier League Footballers Who Have Played Every Minute Of Every Game So Far This Season.

With eight games played, 52 players have been ever-presents for their team. From Leicester and Sheffield United, who have both had five players start and finish every match, to Manchester City, Newcastle, Norwich, Tottenham and Watford, who each only have one player to fit the criteria.

You’ve got nine minutes to name as many as you can. Send your scores to @FourFourTwo when your time is up, and send it over to a mate who should do worse than you. We hope you know your goalkeepers…

ANALYSIS Is there any way back for Mesut Ozil under Unai Emery?

GUIDEPremier League live stream best VPN: how to watch every game from anywhere in the world