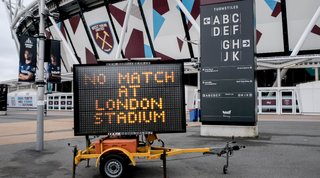 If West Ham get their way and the Premier League season is declared null and void, what basis is there to believe they would do anything differently and use that second chance wisely?

After all, they're the club that cannot stop making the same mistakes.

On social media, Karren Brady is busy back-peddling. In her column in The Sun over the weekend, she lobbied for the abandonment of the Premier League season. Given where West Ham are in the table and what relegation would ultimately mean, the backlash has – predictably – been very fierce indeed. The world's population is threatened by a genuine crisis and Brady’s manoeuvering seemed both opportunistic and highly inappropriate.

In the days since, she’s clarified her remarks, tweeting that:

My point was safety of fans, players, staff come 1st & if the remaining games just cannot be played the only fair & reasonable thing is to declare season null and void. Who knows who would have gone down or come up if the PL/EFL games have not actually been played in full? 2/2 https://t.co/JTQukQv30Y— Lady Karren Brady (@karren_brady) March 15, 2020

Less a clarification, then, and more a hole growing deeper. The only real conclusion to draw is that it would have been better to have said nothing at all.

That’s definitely true in this case, because using the pages of The Sun to advocate that Liverpool should be denied their league title was always going to draw a reaction and one which any communications expert - or football fan - could have seen coming a mile away.

What will happen to the end of the Premier League season? Here are the options to deal with the coronavirus suspension

Whatever the intention, it was a tone-deaf moment. What’s worse, is that it has become West Ham’s official position on the matter. They would deny that, surely, but then this is the problem with public-facing owners. What they say and how they act reflects on the club. For all intents and purposes, Karren Brady is always wearing a West Ham blazer. Just like David Gold and David Sullivan.

As such, owning or operating a football club comes with an implied responsibility to supporters. As a figure of authority, you are not only the head of an organisation, but also an emblem for it and also the closest association with it. It’s tenuous, loose, and less than ideal, but it’s a power which needs to be taken seriously.

With football on an enforced break, now is the moment for clubs to consider such issues and to dwell on whether they're projecting the right image.

With supporter-relations having already deteriorated to such a low point, that might be a futile exercise for West Ham. Developing better operating procedure could hardly makes things worse, though, and a good start would be to make much less noise. For them to be heard less and to offer fewer opinions.

Performance is everything in sport and that’s always been true. But one of the common themes within the situation at London Stadium, is just how regularly this ownership group is bitten by its own words. Most notoriously, Brady herself promised “a world-class stadium with a world-class team” and that’s actually become the ironic slogan of the recent protests. In effect, the club are being mocked by their own boast.

But this is a trend rather than a single unfortunate remark; there’s a catalogue of quotes. The criticism of Leicester’s decision to sack Claudio Ranieri was a terrible own goal, while bragging remarks about the new stadium, again made in Brady’s Sun column, have aged extraordinarily badly, for all sorts of reasons.

“Many Hammers fans regard Spurs as their rival and as they waged a campaign to wrest the Olympic Stadium rights from us, I didn’t regard them as friends. Boris Johnson said we have been an integral part of delivering a massive social and economic legacy from the Olympic and Paralympic Games in east London. Of course we want to beat Spurs tomorrow, but the London Mayor’s praise is worthier bragging rights."

"Three cheers for Spurs who announce that the crowd in their new stadium will be extra-loud due to acoustic technology involving an aluminium-lined, curved roof and padded seats. We didn’t consider such additions at the London Stadium. And, anyway, we like to think Hammers fans can make enough noise to raise our own spectacular roof.”

In a similar vein, was this Daily Mail spread absolutely essential? Did it hurt or harm the relationship with the fans? Was it a smart thing to do in hindsight, now that the argument about loan interest has flared up?

This is the frustration. Fundamentally, West Ham supporters are angry because they feel that they've been sold an illusion. But there’s a bold and antagonistic side to their ownership group which clearly intensifies the unrest, stoking that anger and making it much more personal.

Over time, that lesson should have been learnt. Not just because of the often-humiliating repercussions, but because West Ham’s peers – the individuals in comparable positions across the Premier League – never behave in the same way. They aren’t nearly so vocal. In most cases, fans don't even know the sound of their voices.

How often do quotes from Ed Woodward or Marina Granovskaia appear in the press without being vetted by the club first? Never. Is Daniel Levy on Twitter? Does Raul Sanllehi write a column for The Mirror? Of course not - the idea would be ridiculous.

Most likely that’s because those individuals and the clubs that employ them understand that there’s very little to gain from that kind of publicity. They also accept that, for better or worse, their job performance must speak for itself and that the danger of trying to provide their own commentary is just too great.

So why doesn’t that penny drop in Stratford? Other clubs are presumably lobbying to cancel the season too and are probably just as guilty of trying to capitalise on the outbreak of Coronavirus. Inevitably, though, it was West Ham who managed to make themselves the lone face of that opportunism.

It’s a calamity that could so easily have been avoided, but one which was also hopelessly predictable - ultimately because these aren’t new mistakes. No matter how many times the club suffer self-inflicted wounds, that never seems to instruct any change in their behaviour.