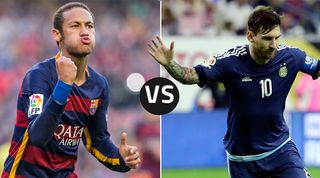 The Argentine magician will have felt hard done by when he failed to scoop the 2015 award for his stunning effort against Athletic Bilbao, but he’s unlikely to make amends by topping this year’s vote.

Nevertheless, this was a brilliantly struck free-kick in his country’s Copa America Centenario semi-final against hosts USA; Messi’s shot from 25 yards out arrowed unerringly past goalkeeper Brad Guzan and into the top corner to double Argentina’s lead, with team-mate Gonzalo Higuain going on to bag a brace and seal a thumping 4-0 victory.

Winning possession with your first touch and going for goal with your second may hint at some sort of egomanical glory-hunt, but Kekana pulled off this feat from inside his own half against Cameroon in March.

The South Africa international pinches the ball after a sloppy piece of control from Tony Tchani and, around 60 yards from goal, immediately drives a fierce shot into the back of the net with minimal backlift. The keeper was well off his line and there have been plenty of strikes of this ilk, but this was a particularly perfect hit from the Mamelodi Sundowns man.

Today’s Barcelona might not dominate like Pep Guardiola’s tiki-taka edition, but this team certainly know how to inflict damage on the counter-attack – 10 seconds was all it took for Luis Enrique’s men to work the ball from their own penalty area and score a goal at the other end in this meeting with Villarreal last year.

Neymar heads a clearance onto Luis Suarez and immediately sprints towards the box, where he receives the return pass after an unfortunate slip from Victor Ruiz. There’s still plenty of work to do at this stage, but the Brazilian makes it all look easy as he flicks the ball over his head, turns full circle and lashes a volley past Alphonse Areola.

Next page: Acrobatics and muggings

Some tidy build-up play from Atvidabergs culminates in Kristian Bergstrom receiving the ball on the left flank, the two-time Sweden international inviting his team-mates to get into the box by immediately cutting infield.

Skrabb is one of three players to oblige, but the delivery appears to be too far behind him and looks set to be headed away by a Gefle defender. Instead, the attacking midfielder spectacularly improvises with a scorpion kick that Rene Higuita would have been proud of.

New Brazil boss Tite has helped restore the Seleção’s attacking verve since replacing Dunga in June, a development which will have come as no surprise to followers of his Corinthians outfit.

This goal against Cobresal begins from the back as the Sao Paulo-based side move the ball confidently through the pitch, before a brilliant one-two between Luciano and Edilson releases the latter down the right. His cross finds an unmarked Marlone, who chests the ball down on the edge of the box and applies an acrobatic finish before two desperate defenders are able to intervene.

Don’t be fooled by the patchy pitch and somewhat grainy images: this goal really was scored in 2016.

The Colombian defence fail to deal with a looping cross from the left, which allows female star Rodriguez to collect possession just inside the penalty area on the other side of the pitch. With her back initially to goal, the Venezuelan midfielder manoeuvres past her marker with a crisp Cruyff turn, before demonstrating some more fabulous footwork as she takes the scenic route to get around another opponent. The 17-year-old then sends the first defender sprawling with another piece of tremendous skill, leaving the path clear for her to fire a finish into the roof of the net. See ya!

Next page: Time for (unlikely) heroes

Mario may have been the Spanish star England were fearing least ahead of this friendly last November, but the Villarreal defender was the was responsible for the highlight of the match.

After pinching possession from Raheem Sterling, the right-back marauds forward down the flank and picks out Paco Alcacer, who lays the ball back to Cesc Fabregas. Mario then darts infield but has to quickly adjust his body as the Chelsea midfielder’s lofted pass drifts over his right shoulder. He still has his back to goal when the ball approaches, but a superb swivel sees him connect with a mid-air scissor kick to which Joe Hart has no answer.

Wales were among the best stories of an otherwise-mediocre Euro 2016, and this was their crowning moment.

With the scores level at 1-1 after 54 minutes of their quarter-final clash with Belgium, Gareth Bale releases Aaron Ramsey down the right, with the Arsenal midfielder doing brilliantly to bring the ball down and feed then-free agent Robson-Kanu inside the penalty area. His first touch is decent enough but it's the second that makes this goal, the 27-year-old fooling three opposition defenders with a Cruyff turn that the late Johan would have been proud of, before placing the ball past Thibaut Courtois to send the whole of Wales wild.

Context is key for this contender: Robson-Kanu's piece of skill was magnificent in itself but the fact that it came at such a pivotal time in a crunch knockout tie makes it all the more special.

Bayern Munich appear to be in a solid defensive shape when Saul picks up possession just inside the centre circle, which highlights what a sensational goal this was.

The Atletico Madrid man cleverly works the ball past Thiago Alcantara while assessing his passing options, before deciding that he might as well go it alone. Two exceptional touches take both Juan Bernat and Xabi Alonso out of the game in the same move, which leaves David Alaba as Bayern’s only possible saviour. He’s also unable to halt Saul, though, as the Spaniard opens up his body and uses his opponent as a guide to squeeze the ball into the net via the inside of the far post – the only place he could have put it.

This goal proved to be the winner and helped set Atleti on the path to the Champions League final.

Next page: Who's our winner?

Beating a goalkeeper with a fine strike is one thing. Defying physics is quite another. Faiz managed exactly that with this mind-boggling free-kick for Penang FA in February; the bend he's able to generate is astonishing, the ball arcing around one side of the wall before violently changing course and finding the opposite corner of the net.

The poor goalkeeper is utterly bamboozled by the free-kick's unusual trajectory, while Faiz looks like he can't quite believe what he's just pulled off either. It's a goal that still seems impossible after dozens of viewings (trust us), and would be a worthy winner of the 2016 Puskas Award. Bravo.