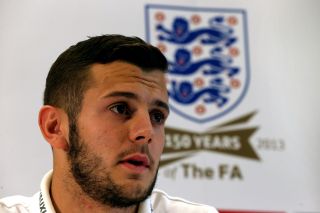 There’s something oddly ironic and a little worrying about Jack Wilshere's much-reported views on the nature of English players, comments made following speculation Manchester United's Belgian-born youngster Adnan Januzaj could and should be persuaded to play for England.

Ignore the nonsense about players born beyond these shores - his words have subsequently been twisted out of all recognition - and focus instead on his comments on the technical qualities of our players.

"We have to remember what we are, we are English and we tackle hard and we are tough on the pitch and we are hard to beat," the Arsenal midfielder told the assembled media in a press conference ahead of England's World Cup qualifying double-header against Montenegro and Poland. "We have great characters. You think of Spain and they are technical, but you think of England and you think they are brave and they tackle hard."

Although he did go on to add that England were capable of playing possession football and didn't have 'a bad technical player' in their current squad - citing the likes of Tom Cleverley, Daniel Sturridge and Wayne Rooney — his distinction between ‘technical’ players and those known for tackling and 'bravery' is not only at odds with his own broad skill set, but also the make-up of the new generation of England players of which he is surely the figurehead.

Wilshere's breakthrough performance came in the Gunners' Champions League last 16 first leg victory over Barcelona in February 2011, and it was his ability to combine aggressive defensive play with neat and expansive passing that was most impressive.

It was a showing that made you sit up and take notice, because all of a sudden there was a young English player not only trying to take on Xavi and Iniesta at their own game, but also attempting to stop them playing it themselves.

Speaking of the then-teenage midfielder's performance that night, Arsene Wenger said: "He was outstanding. Jack wasn’t fazed by the occasion. In the difficult periods when we were under pressure he took the ball and kept the ball. He played really well."

Injuries may have delayed Wilshere’s progress since – we hope temporarily – but since then, a steady flow of English youngsters who similarly marry excellent technical skills with impressive physical attributes has trickled into the Premier League.

Over the past 12 months Ross Barkley, Andros Townsend and Ravel Morrison have all started to show their worth in the Premier League, and like Wilshere, all three have shown a willingness to counterbalance their tricks and flair with hard graft and a willingness to fend off challenges and 'put themselves about', to coin a phrase.

This is the new breed of England player – aggressive playmakers more akin to the ‘streetballers’ of South America than the dirty-shorted ball-winners with haircuts like 1940s RAF pilots or 1980s accountants we’ve become accustomed to. This is a generation of players who grew up idolising and mimicking Bergkamp, Zola and Di Canio, rather than Carlton Palmer or Mickey Quinn.

While England are still light-years behind the Netherlands, Germany and Spain as far as player development is concerned, for all the talk of impending doom and the need for a(nother) ‘root and branch’ review of English football, there’s at least some promise in England’s not-too-distant future.

Nathaniel Clyne, Luke Shaw, Tom Carroll and Nathan Redmond have all also shown great potential, while the likes of Chris Smalling, Kieran Gibbs, Phil Jones and Jack Rodwell will all improve if they can overcome their respective injury problems and secure regular first-team football.

These are all players who look more than comfortable with the ball at their feet (yes, even Phil Jones). While being able to tackle is never a bad thing, keeping possession in the first place should surely be the priority - these players should be looking to do that rather than reverting to some archaic national stereotype we sometimes use to make ourselves feel better about falling behind other nations.

In essence, Wilshere is doing himself and his peers a disservice. The days of England focusing on bravery and brawn at the expense of ball-playing and brains could be almost over. Or at least they should be.