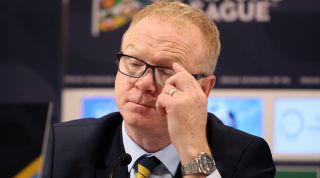 Scotland’s shamed players hadn't even returned from the scene of their latest nadir in Kazakhstan when speculation started to swirl around the future of Alex McLeish. So devastating was that 3-0 defeat, to the world's 117th-ranked side, that the national team boss was deemed to be a goner.

The name that surfaced as McLeish’s likeliest successor? Gordon Strachan. His predecessor.

That might no longer be the case, given the controversy Strachan has been engulfed in of late, but the mere mention of his name as a solution to Scotland's issues illustrated the plight that football north of the border is currently facing. Scottish football is suffering from a crisis of imagination.

It’s been that way for best part of two decades. Scottish football is devoid of leadership and innovation at the top level, manifesting itself in the national team's performances of late. While England, Northern Ireland and Wales have all not just qualified for major tournaments but made knockout rounds in the last three years, Scotland have watched from home. They’ve watched from home since 1998.

Some will put that down to deeper, underlying issues with the structure of Scotland's game, particularly at youth level. But while that argument might have carried weight in years gone by, it now appears somewhat flimsy. Scotland boast their most exciting group of young players in a generation – see Andy Robertson, Kieran Tierney, Stuart Armstrong, James Forrest, Scott McTominay and Ryan Fraser as cases in point.

This is what makes recent events so galling... so infuriating. Scottish football, for once, is not being failed by those on the pitch, but those in the corridors of power. It was evident in the way McLeish was hired in the first place (or second place, more accurately).

Why England's shiny, self-aware new Golden Generation have everyone over a barrel

The phrase ‘jobs for the boys’ is used a lot – sometimes unfairly – to describe Scottish football’s general unwillingness to think outside the box. But the Scottish FA’s process of hiring McLeish last year took that cliché to a whole new level. After the botched attempt to lure Michael O’Neill from Northern Ireland, two names were shortlisted – Walter Smith and McLeish. Two close friends of Scottish FA president, Alan McRae.

The recruitment process amounted to a quick scroll through some recently dialled numbers.

Malky Mackay was another underwhelming hire, taking on the highly technical position of Scottish FA performance director back in 2016 despite having no technical experience. And that’s without even going into the allegations of homophobia and racism made against him during his time as Cardiff City manager.

The Scottish FA isn’t the only authoritative body failing football north of the border. Time and time again, the decision is taken to tread water when Scotland's national team is faced with an opportunity to innovate and do something different; to go with what is already known rather than what is not.

Look at the rebranding of the Scottish league system, which ripped off the English league pyramid by naming its divisions the 'Scottish Premiership', 'Scottish Championship', 'Scottish League One' and 'Scottish League Two'. Or the striking of a long-term TV deal with Sky Sports in November, at a time when most in the industry are in agreement that sports broadcasting is on the brink of a fundamental shift away from traditional methods.

There is plenty to be excited about in Scottish football. The green shoots of improvement are poking through previously-scorched ground, but those in charge of the sport are doing their best, through ignorance, to stomp all over them. Even with McLeish gone, there’s little to suggest anything will really change.

RANKED The 50 best players in the Premier League this season