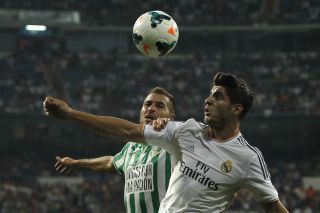 Real Madrid are locked in a never-ending crisis of identity. At a basic level, it stems from the difficult balancing act of juggling two philosophies that tussle constantly for the hearts and minds of the Madridista faithful. It’s about the juxtaposition of two words: ‘Zidanes y Pavons’.

On the one hand, Real Madrid crave the good times. The glory years of the 1950s when they dominated football, winning five European Cups in a row. The majesty and grandeur of Di Stefano and Puskas, the wizardry of Gento, the exotic flair of Kopa. La decima – the hunt for a 10th European crown – is an obsession. Over the years this passion for the perfect 10 has intensified, yielding a transfer policy that ushered in the age of Galacticos and dictated the record signings of players like Gareth Bale. The Zidanes.

On the other hand, however, a delicate counterweight alongside this craving for world football’s superstars, like two trapeze artists sharing a tightrope, is another desire – purer, perhaps. For, at the same time, nothing captures Real Madrid's imagination more than a homegrown player, a Spanish success story.

It’s a significant part of why players like Raul and Iker Casillas are so revered, why the famous ‘Quinta del Buitre’ team of the 1980s is so loved, despite never winning a European Cup. All five star players from that team, of which Emilio Butragueño was the headline act, came from La Fabrica – Real’s academy. The Pavons.

More recently, it’s part of the reason Barcelona’s all-conquering team has so irked their eternal rivals. That Barça have been the era-defining team of the last decade is bad enough. That they’ve done it with so many homegrown players has those of a Madrid persuasion chewing on their own rage.

There is context, therefore, in the way Alvaro Morata appears to have been anointed the new golden boy of the Bernabeu.

The clamour for Morata to supersede Karim Benzema as Real’s first-choice striker has been reaching new levels almost daily. In a recent AS poll, 86% of Real Madrid fans said they want Morata in the starting XI. Since Gonzalo Higuain’s departure, and in the absence of any replacements, Morata is the crowd’s new darling.

Audible groans from the terraces accompanied most of Benzema’s work in the Champions League win over Juventus. “The biggest ovation at the Bernabeu this season has a name and surname: Alvaro Morata,” wrote Antonio Romero in AS. The crowd have made their choice.

So who is Alvaro Morata, the new big hope of the Bernabeu?

Like Raul, Morata isn’t quite a true product of Real Madrid’s academy. Born in Madrid, the 21-year-old striker started his career in the junior teams of Atletico Madrid and then Getafe, before he was signed in 2008.

His record in Real’s junior teams has been exceptional. He scored 34 goals for their Juvenil C team in 2009/10 and has risen rapidly through the ranks since. He made his debut at 18 against Zaragoza, but his real introduction to life at Real Madrid came in an 8-0 win over Levante in the Copa del Rey 10 days later.

With 13 minutes remaining and Real 7-0 up, Morata came on to play a major part in the eighth goal. The ball was played into the teenager with his back to goal. He turns his man with precocious strength, beats another and fires a powerful, low effort that the keeper can only parry to Pedro Leon for a tap-in.

Leon’s name was on the scoresheet but Morata’s was written in the minds of those present. He received a standing ovation. After the game, the entire team signed the ball for Morata to keep. “Don’t worry” wrote Cristiano Ronaldo in his dedication. “You’re going to score loads of goals.”

Morata has quickly grown accustomed to the media spotlight that comes with being at one of the world’s biggest clubs. In 2011, calls for him to be integrated into the first team were casually dismissed as premature by Jose Mourinho, after Higuain was sidelined with a lengthy injury. “Morata isn’t ready to start for Real Madrid,” Mourinho barked. “He’s training with the first team, but he needs to keep learning.”

The comments were extrapolated into a wider media debate about the quality of Real Madrid’s youth team, to Jose's dismay. But he had a point.

Morata took Mourinho’s advice. He did keep learning and developing – indeed it was noteworthy that after starting his first game of the season in Real’s 2-0 win over Malaga last weekend, Morata thanked Mourinho specifically for making him the player he is today (along with youth team coach Alberto Toril).

Predominantly, it’s Morata’s own ability and potential that has led to the excitement that now surrounds his every mention. He has starred in Real Madrid’s cantera and for Spain at junior level. At the Under-21 European Championship in Israel he finished as tournament top scorer despite only starting two games, forcing his way into a star-studded lineup and firing them to the title.

With his fresh face and thick black quiff, Morata has the animated features of a Spanish cartoon character, but the boyish looks contradict his tenacious, at times aggressive style of play. At 6ft 3in he is more Fernando Morientes than Raul, a comparison Morata himself has made.

Powerful in the air, quick along the ground and incredibly determined, he’s also a handy finisher and crosses well when positioned on either side of a central striker, as he was in the 2-1 win against Barcelona back in March. The technical element of his game can improve – he strayed offside an ungodly number of times against Malaga – but the fans’ hankering for Morata to be given a regular starting berth sums up not only his qualities, but how far Benzema has fallen out of favour.

This weekend it’s El Clasico. Once again, the pre-match polls suggest Morata should be the one to lead the line for Carlo Ancelotti’s team, in the biggest game of the season against champions Barcelona.

Ancelotti has been hesitant, still not quite convinced, perhaps, which is why Morata has only started one league game this season. He grabbed an assist in that March Clasico, but it barely registered: the game’s timing rendered it virtually inconsequential – Barça had the league pretty much wrapped up and Real Madrid had their eyes on Manchester United in the Champions League.

In the summer, Marca ran a feature describing Isco, Daniel Carvajal, Asier Illarramendi, Jese and Morata as the new Quinta del Buitre: “young, Spanish and eager to take on the world at Real Madrid”.

“The hour has come,” ran the piece. “The strategy has changed.”

Morata already has the goodwill of the crowd. Starting with El Clasico, he has the chance to becoming the leading figure of a new generation at Real Madrid: the class of ’92.