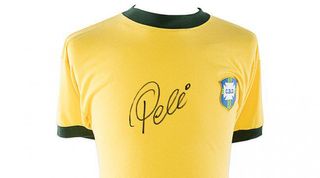 Pele. Is there any name in the sport that crosses so many barriers, continents and age ranges? It’s a name simply synonymous with football.

Nobody has won as many World Cups as the great Brazilian, who also netted over 1,000 goals in his career, while the sight of his smiling face cheers us up just as we’re about to despair during some prolonged FIFA draw ceremony.

Now, in the spirit of the great man’s generosity, FourFourTwo have teamed up with A1 Sporting Memorabilia to give one lucky winner a Brazil 1970 World Cup shirt signed by O Rei himself in a private signing session in 2016.

A1 Sporting Memorabilia is the home of signed sporting memorabilia, providing customers with legendary names, at legendary prices. A1 have built up a catalogue of star names in sport, with the likes of Steven Gerrard, Eric Cantona, Anthony Joshua and Pele all part of their star-studded line-up.

To enter the competition click here and answer the question.