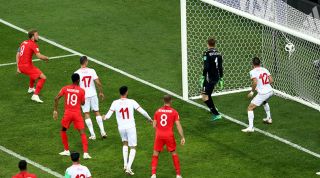 Harry Kane once again proved he's the man for a big occasion – but must they do this to us? England were clearly the better side in Volgograd but should never have required a 91st-minute goal to see off Tunisia in their World Cup opener.

Their last-gasp effort was just reward for a thoroughly dominant night which threatened to end in disappointment after a string of fine opportunities went begging and referee Wilmar Roldan's decisions mostly went against them. VAR didn't serve them well either, setting up a needlessly fraught end to what was otherwise a fairly promising performance from the Three Lions. (More on that here.)

Still: job done, with Panama lying in wait. Play like this again and they'll make light work of the Central Americans. That's how these things work, right?

The knock on Belgium at Euro 2016, where the Red Devils lost to a tactically smarter Italy and an inspired Wales, was that this was a team less than the sum of its parts. Two years on and, despite a convincing 3-0 win in their World Cup opener against Panama, the doubts remain.

A brace from Romelu Lukaku and wondergoal from Dries Mertens gave the Red Devils an opening-game win against Panama, but put in perspective, they probably won't face a worse team at this tournament. The Central Americans fought for a goalless first half but crumbled in the second – and few sides will do that so spectacularly at this level.

Belgium were underwhelming in that first period, and the old accusation that manager Roberto Martinez struggles to find a system which gets the best out of such a talented squad reared itself once more. The Spaniard's team were much more incisive after the break, but for now judgement is reserved on whether this is finally the tournament that this country's so-called golden generation shines as it should.

‘Nobody likes change’ as the saying goes, but let’s not complain too loudly about VAR and the inevitable teething problems. During Sweden vs South Korea, there was a contentious moment when referee Joel Aguilar got word from VAR HQ that he might have missed a penalty for a foul on Viktor Claesson. He stopped the game with South Korean mid-counter-attack to check the TV screen – and awarded Sweden a spot-kick.

The glass-half-empty view is that if Aguilar had decided it wasn’t a penalty, he’d just halted a Korean attack for no good reason, rather than waiting for a break in play. Yet the wider point is that, after a fairly clear foul was missed, VAR worked to help the referee and give Sweden the penalty they deserved.

Captain Andreas Granqvist converted and Sweden won 1-0. Hardly the smoothest use of VAR – but probably preferable to a 0-0 and the main talking point post-match being that Sweden had a stonewall penalty ignored.

Pre-tournament expectations were fairly low: after all, this was a country that qualified from the hexagonal qualifying stage of CONCACAF with a negative goal difference (nine goals scored, 10 conceded). Hernan Dario Gomez's team did enough to throw Belgium off their stride in the first half and looked lively on the break themselves until final-third quality was required.

But it didn't last. Their European rivals chopped through them after half-time, five Panamanian players were booked and Belgium ultimately kept them at bay fairly comfortably. England will hope to score early against them on Sunday and pick holes from there.

So screamed the headline of Rio de Janeiro-based newspaper Extra after Brazil's disappointing 1-1 draw with Switzerland on Sunday night. Neymar may be third on the nation's all-time goalscoring list by the age of 26, but even he's not safe from the blood-thirsty media back home. Meia Hora went one worse, simply splashing a cockatoo on their front page in reference to their talisman's bold World Cup mop.

O Dia's "frustrated" headline seemed to best sum up the country's mood on Monday morning, having seen their side take the lead thanks to Philippe Coutinho's early beauty, but pegged back by a Steven Zuber header. It was later revealed by ESPN that Neymar was fouled more times (10) than any player in a World Cup match since Alan Shearer (11) vs Tunisia at France '98.

Swedes miss Zlatan after all?

Throughout last season, that shy, shrinking violet Zlatan Ibrahimovic dropped heavy hints that he might come out of international retirement for the World Cup. Sweden – who qualified at the expense of Holland and Italy – never came calling and this was widely lauded as a sensible move. Why disrupt a united team of overachievers by dropping Ibra in there?

Yet against a very limited South Korea side, Sweden looked fairly toothless. Marcus Berg fired a fantastic first-half chance straight at the goalkeeper and – were it not for a clumsy challenge, Kim Min-woo and a belated VAR-decided penalty – this game might well have finished 0-0. Sweden have far harder opponents to come next in Mexico and Germany; their lack of firepower up front may well cost them.