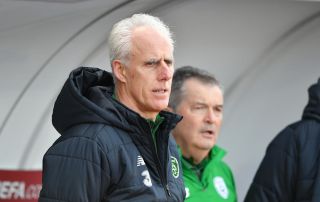 Mick McCarthy’s Republic of Ireland head into their Euro 2020 qualifier in Denmark on Friday evening sitting proudly at the top of Group D.

But after opening their campaign with narrow victories over Gibraltar and Georgia in March, sterner tests lie ahead, with the Danes familiar foes after four previous meetings inside the last 18 months.

Here, Press Association Sport takes a look at some of the talking points surrounding the game at the Telia Parken Stadium.

It is McCarthy’s misfortune to have perhaps his two most effective Premier League players fighting for the same right-back position. Skipper Seamus Coleman has made the spot his own but Matt Doherty starred for Wolves as a right-wing-back this season, and the manager understandably wants to get both men into his team if possible. By his own admission, playing the pair on the right in Gibraltar did not work, so either leaving one out, or finding the best way to accommodate both represents one of his biggest decisions.

Robbie Brady returned from the Euro 2016 finals in France after establishing himself as a genuine senior international but the going since has been significantly tougher. Injuries and a lack of form have led to a reduced role for club Burnley in recent months, and while his set-piece delivery is one of Ireland’s most potent weapons, his place in the starting XI is far from guaranteed.

Aston Villa can this afternoon confirm the release of eight players. Thank you, and good luck. 💜http://bit.ly/2XksTcy

Glenn Whelan needed no second invitation when McCarthy called him to ask if he had retired from international football. A stalwart of 86 caps, his days in the green jersey looked to have drawn to a close when Martin O’Neill seemingly handed him a farewell appearance against Northern Ireland in November last year but he is back in the fold and ready to fight for a place in McCarthy’s engine room. Despite his recent release by Aston Villa in the wake of their return to the Premier League, he has every chance of starting.

It just wasn't meant to be. We lose out in the #UCLfinal. pic.twitter.com/32sijhEYjB— Tottenham Hotspur (@SpursOfficial) June 1, 2019

Much of the talk in the run-up to the game has centred around Denmark’s mercurial midfielder Christian Eriksen and how much of a toll Saturday night’s Champions League final defeat by Liverpool will have taken on the Tottenham playmaker. McCarthy, however – and every player asked to offer an opinion – have insisted what happened in Madrid will be irrelevant and they expect the man who famously scored a World Cup play-off hat-trick in Dublin in November 2017 to be as dangerous as ever.

The Republic have been crying out for a goalscorer since Robbie Keane hung up his well-worn boots in August 2016. Shane Long, who has contributed important goals for his country in the past, reported for duty in a rich vein of form after scoring four times in his last seven games to help Southampton clinch Premier League survival. However, a hamstring injury in training ended his hopes of running out in Copenhagen and it could be David McGoldrick whom McCarthy turns to again after the Sheffield United man starred in both his club’s promotion to the top flight and Ireland’s victories over Gibraltar and Georgia.