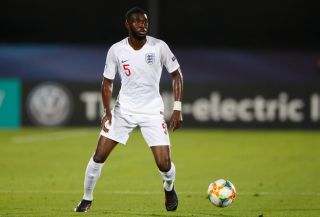 Here, the PA news agency takes a look at the 21-year-old who is already earning a reputation for long-range strikes and spectacular own goals…

Tomori had plenty of international options: he was born in Canada to Nigerian parents, before moving to London and enrolling in the Chelsea academy system at the age of eight. He played for Canada’s Under-20 side in 2016, before committing to England.

During his brief spell in a Canadian national shirt, Tomori won plenty of praise for his dominant approach. The Canadian Under-20 coach Rob Gale said: “He has a desire and aggression about him to win the ball back. It’s a trait we’ve almost lost in our modern defenders.”

He made his Premier League debut in the final game of the 2015/16 season in a 1-1 draw with Leicester, and was rewarded the following August with a four-year contract. In his second top-flight game against Wolves this year, he fired a stunning effort from 35 yards.

Tomori has spent loan spells at Brighton, Hull and Derby. On his Brighton debut, he scored an own goal in their FA Cup defeat to non-league Lincoln. Having played 40 of 43 league games for Derby last season, he was rewarded with two of the club’s player of the year trophies.

Tomori was part of England’s victorious Under-20 World Cup campaign in 2017. However, he will be remembered for another – much more spectacular –  own goal in the 1-1 draw with Guinea, when he played a back-pass from almost the halfway line which caught out keeper Dean Henderson.