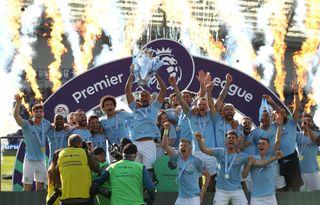 In the end it was fitting. A title race which stood out for the remarkable consistency of the two contenders ended with both finishing with victories – enough for Manchester City to retain their crown. City were perhaps less than comfortable as they fell behind at Brighton but if anything it probably helped as they awoke from an early lethargy and ran out 4-1 winners.

The question after last season’s title was could Manchester City repeat? The question now is, where does this end? Pep Guardiola’s side may have had their stumbles at Christmas, but a run of 14 straight wins to end the season – while under relentless pressure from Liverpool – marks this team out as a truly special side. Guardiola said City’s 100-point haul last term had raised the standards in the league and Liverpool had responded. So what will next season bring? “It will be tougher but we will be stronger too,” Guardiola said. “When you can win two in a row I have the feeling that next season we will come back and try to be who we are right now.”

"We've come up against an incredible team and for us to get that close, it just shows you how far we've come."@andrewrobertso5 reflects on our @premierleague campaign. 🔴— Liverpool FC (@LFC) May 12, 2019

It will take Liverpool some time to understand how they have not ended their 29-year wait for the title after piling up 97 points and losing only one league game all season (against City). Many neutrals will now hope they beat Tottenham in the Champions League final next month because a team this good does not deserve to end the campaign empty-handed. But Liverpool fans also know that where in the past they have seen key players like Luis Suarez, Raheem Sterling and Philippe Coutinho leave after they fell short in the pursuit of trophies, that looks highly unlikely to happen with Jurgen Klopp’s squad, and they will surely be back to challenge again.

The honeymoon was over some time ago, and Ole Gunnar Solskjaer might be wondering if he soon needs marriage counselling as Manchester United’s season sank to a new low on the final day with a 2-0 home defeat to already-relegated Cardiff. The result meant United finished the season five points off the top four, which feels like a yawning gap as the standards only rise at the top end of the table. The scale of the rebuilding job ahead at Old Trafford is a truly daunting one, both in terms of a squad likely to see several arrivals and departures, but also in the corridors of power as the club continues to seek a director of football. Fan discontent is growing, and something dramatic is needed in the next few weeks to change the mood around the club.

Newcastle spent much of the season battling relegation but finished it in some style on Sunday with a 4-0 rout of Fulham in the capital. But the enjoyment of the travelling Toon Army would have been tempered as they spent most of the afternoon imploring Rafael Benitez to stay and continue the job he has done in such fine fashion. After the game, the Spaniard offered few assurances as he continued to demand support in the transfer market from club owner Mike Ashley. “We will have a meeting hopefully next week and we will see where we are,” Benitez said. “I can see the potential of this massive club and hopefully we can do things in the way that would be very good for everyone to move forward together. I don’t want to keep talking, we’ll see what happens next week.”

FULL-TIME: The points are shared on the final day as we secure our spot in the top four.— Tottenham Hotspur (@SpursOfficial) May 12, 2019

A draw at home to Everton on the final was enough to secure Tottenham’s place in the top four but it was not a performance to stir the hearts. For all the brilliance Spurs have shown in reaching the final of the Champions League, their domestic season has once again demonstrated they do not have the depth required to sustain a title challenge for a full campaign. Mauricio Pochettino has done a brilliant job having not been afforded a single signing for two transfer windows in a row, but – with the stadium move finally sealed – there must be investment this summer in order to deliver on the potential shown.